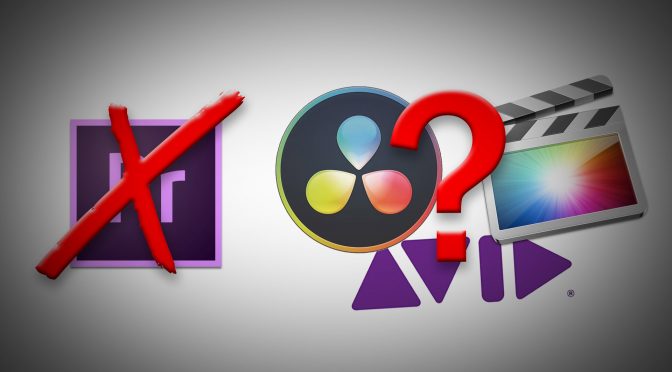 Is it time to quit Adobe Premiere? If you are thinking about it but aren’t sure what to replace it with and why, or if it’s worth it, then hopefully my experience will help you.

I’ve been one of the most devoted users of Adobe Premiere since way back in 1994 when I was just learning. Then as I started to work professionally I had my share of experience of using Avid Media Composer because if you work in films then you know Avid was and still kinda is the leader. But through that whole time I kept on using Premiere as my main editing software when I did personal projects at home. Then in 2003 when they came out with Premiere Pro I really embraced it for personal but also paid projects.

No fast forward to November 2018 and I have been Adobe Premiere free for the last 5 months. In fact, pretty much all my videos, films and music videos that I’ve worked on since June have been edited in Davinci Resolve. Now does that mean you have to use Resolve? No there are other options that I’ll talk about.

First let me start with the WHY? So why did I abandon Adobe Premiere? Various reasons but the main one is their subscription model. The software is great! It has a lot of unique features but I did find the constant upgrades annoying, especially when they would release a new version full of bugs.

Some of you are probably gonna say “so why did you upgrade right away?” well because when you are working on a project with various people editing and then one of your collaborators upgrades then suddenly I wasn’t able to open properly their project files. So I was kinda forced to upgrade.

Now the biggest reason why I quit Premiere is actually their damn annoying subscription model. It’s getting more and more expensive, first of all, not to mention that you will never be done paying for the software because in reality it’s more like you are just renting it.

Just like I tell other filmmakers when it comes to investing in camera gear. If you are only using your camera once every so on then it might make more sense to just rent out the latest camera instead of buying it. This way you will save some money and you will always have the latest camera. But if you are constantly shooting then buying a camera is going to be a lot cheaper in the long term. Plus you know you will always have the access to the tools when you need them, even if its on short notice.

Well with premiere it’s not the case. You are always renting. Since I edit a lot when it comes to my paid professional work and these free youtube videos, so I always need access to the tools. Just so happens that too often I had a problem because of the subscription model. Basically you pay a monthly fee but then when you start up the program you need to have access to the internet every so on to verify that you did in fact pay for the current month. At the beginning of this year this was a huge problem since I was editing a bunch of projects while traveling through Ecuador and on few occasions I didn’t have internet access and basically wasted days since I could not use the software even though I paid for it. That is just not a reliable piece of tool for serious work.

In fact there is a lie going around, in part because of the marketing done by Adobe that Premiere is the number one editing program used in the film industry. Yes their program is the most used right now but that is because everyone uses it from some professionals all the way to grandma’s editing their cat videos.

If you look only at the Hollywood or Bollywood or European film industry, the number 1 editing program being used on feature films and TV shows is still Avid Media Composer.

What program should you switch to if you are tired like me of Adobe? I would say do like I did, and just switch to Davinci Resolve. And no I am not getting paid by them. Why do I think that Resolve is the best option when there are other choices? First let me break down all the available options. Avid Media Composer is a fully capable film editing program but it is not the easiest to learn to use and in part because it’s been around for the longest time and it has been built specifically to fit the world and lingo of old skool editors in Hollywood who edited on actual film. So some of the terminology might be confusing. Also it has really powerful networking capabilities that you will need to learn to setup up, or at least understand the basics of. Since many new video editors these days just want to jump in and start editing and since many projects these days are much simpler, where they don’t require all that networking capability, it means that most of the new editors just don’t want to spend the time learning something that they will not be using when editing a simple youtube video on their laptop.

That is why slowly Avid is losing it’s share of the market. Now premiere like I said, does everything right in terms of the ease of use and the advanced functionality but the main problem is that damn subscription and constant need to have internet access.

So what about Final Cut Pro X. Well it’s also a great editing tool but the biggest problem with it is that it’s only on Mac’s. So if you’re not an apple user like myself and many others in the industry, then that right away makes it obsolete. Even if you love Apple products and you have all the Mac’s you can afford the chances are you will still need to learn and use another editing program that works on Windows, because there will be projects that you will be hired for where another collaborator is going to be using Windows. Now, all the other programs like Avid, Premiere and Resolve run on both windows and mac.

That brings me to Blackmagic Davinci Resolve. It works on multiple platforms. It doesn’t have any subscription. You pay once and you get the program to use for life. Not only that but you get free lifetime upgrades AND it’s cheaper than the other options. In fact it’s free! Yup, no lies. If you want to download and start using Davinci Resolve then you can go right now to their website and download it. The free version has most of the functions of the paid version. One biggest thing I noticed in the free version is that because they are using the freely available H.264 decoder it means that editing certain of those video files from consumer cameras that use that codec will be a bit choppy during playback. Now if you are editing any raw files or Apple Prores then it’s not a problem even on an average system. Now in the paid version of Resolve which by the way is only $300 bucks, you don’t have any of those problems. Also if you buy any of the Blackmagic Design cameras you will get a copy of the full Davinci Resolve Studio. In fact my new favorite camera the Pocket Cinema Camera 4K is only $1300 and you get Resolve.

Also Resolve, in case you didn’t know, is probably one of the best color grading applications. Most of the big hollywood films and TV Shows have been graded in Resolve. It’s been one of the reasons why I used Resolve for years for color grading. Except before I would edit in Premiere and then I had to transfer the whole project to Resolve. Well, now Resolve is also an amazing editor, so I can edit the project in it, right away color grade it and then even do any VFX I need done. That is because it now also contains Fusion, which is like Adobe After Effects but node based instead of layer based. Another thing that Resolve has is a powerful audio editing and mixing suite called Fairlight. So again, before I had to edit in premiere but if I wanted to do effects I had to export those shots to Adobe After FX and to do my final sound mix I would have to export the project to Adobe Audition or ProTools. Then at the end import all of that back into Premiere for final output. In Davinci Resolve I don’t have to do any of that. Means I can just edit my project and while doing that I have my assistant do some rough color grading and sound mixing. Then once it’s all done and I put my final touches on the grading or VFX. Then even if the client suddenly calls me to make an editing change I can do that all in the same program without having to redo the color grading or sound mixing or VFX. I don’t have to import or export anything between applications.

So honestly with Resolve right now I don’t miss Adobe Premiere or even
the whole Adobe Creative Suite. The only thing you might be asking yourself is “What about Photoshop?”

Just use a substitute like I do. GIMP is a free program that is constantly being updated. It’s an open source program that has been around for a long time and it’s also available for all the operating systems.

So if you want to free yourself of Adobe like I did then now you know how to do it. And if anyone working for Adobe is watching this video, all I would say is to honestly reconsider that damn subscription model you have or maybe offer along the subscription a full paid version of the programs that doesn’t require constant internet connection. Otherwise you will lose a lot people in the industry, even though you have some really amazing software.