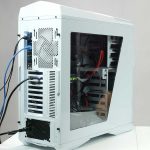 When at my home studio, I edit on a PC desktop I built myself. It cost me about USD$2,250, and I’m very happy with it. You can find out all about it here.

I’ve also done a review of my monitor, the BenQ SW200PT. I got it because it has very good color accuracy, and it is very reasonably priced. You can see the full review here.

I have also worked on a custom workstation from Z Workstations. It was an impressive piece of hardware. It does cost more money, but you get better hardware (which you can customize), more optimization, and you don’t have to spend the time and take the risks of building it yourself. Of course, DIY projects can be fun.

Here is the review of the Z Workstations editing rig. 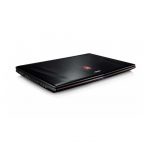 I am often on the road, and so I do a lot of my editing on a laptop. Currently, I use the MSI GE72. You can see my review of it here.

I’ve upgraded that laptop with SSDs. You can read about it (including how I migrated the operating system) here.

As many of you know, I work with my brother. He edits our projects on a budget gaming laptop, the Asus GL553.

Like me, he’s also reviewed his laptop, and upgraded it with an SSD. You can follow the links to find out more.

The articles and videos I referenced above provide more details, but, in general terms, here is the hardware I recommend:

Expanding on the GPU recommendations, for desktops I would get the Nvidia GTX 1070 (which is what I have) or 1080. The Nvidia Quadro is also an option. Whereas the GTX GPUs are designed for gamers, the Quadro line is specifically designed for visual content creators. Nevertheless, the GTX chips are fully capable of handling projects of indie filmmakers, and represent much better value.

For laptops, the GTX 1050 or 1050Ti that come with budget laptops are good enough to edit most 4K footage, and handle some graphics too. My brother edits footage from the Panasonic GH5, for example, without a problem (again, he has the GTX 1050).

I think the GTX 1050Ti and 1060 GPUs strike a good balance between performance, size, heat and cost. You can get a GTX 1070 for a laptop too, and you’ll have a powerful machine, but these are heavy, expensive laptops that generate a lot of heat.

Portability vs Power and Performance

Since an editing machine needs a decent GPU, and these draw a lot of power, an editing laptop needs to be plugged in most of the time. So, I don’t put a big value on battery life (which is a key feature of ultrabooks).

I think most people who edit on laptops pick 15 inch models. I normally sacrifice portability for screen size, and opt for laptops with 17.3 inch screens. However, Dell has been doing a great job shrinking the bezels in their XPS line, giving us both great portability and good screen size. 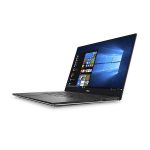 I know that the Dell XPS 15 is expensive, but it is an impressive laptop nonetheless. If you can afford it, why not.

Talking of light editing machines, since last year I’ve used the Surface Pro 4 to edit some of my videos. Even though this device only has two CPU cores (like most ultrabooks), it’s still handled 4K footage from the Panasonic GH4, G85, Sony a6300 and a6500.

The trick, though, is that I have to reduce the video playback to one-fourth of the resolution. And if I apply effects, I sometimes have to render a preview. Also, when rendering the final video, it takes much longer than on a desktop or good laptop. So, you don’t want such a device as your main editing machine.

Still, considering the amazing portability of this tablet-like device, it’s great to know that in a pinch, I can even edit 4K video. And for general office work like email, internet browsing, Microsoft Office, it’s very smooth.

I edit primarily in Adobe Premiere Pro. It is a very good editing software, but a big reason I use it is its integration with the other Adobe CC programs, mainly the After Effect, Audition and Photoshop.

For smaller projects I do color grading right in Premiere Pro. For extensive color grading, I use DaVinci Resolve. Here is a video where I show how to move video projects between these two programs.

I have edited in DaVinci Resolve. BlackMagic’s editing software is getting really good. If it wasn’t for the integration of Premiere Pro with the other apps, I might go 100% with DaVinci for editing.

I don’t have experience of editing in Final Cut. In general, I don’t use Apple products, because it seems to me that they don’t offer good value. When it comes to editing, Final Cut has the advantage of being optimized for the hardware that it runs on. However, if you want the whole suite of applications that Adobe CC offers, you are better off running it on Windows, rather than MacOS.