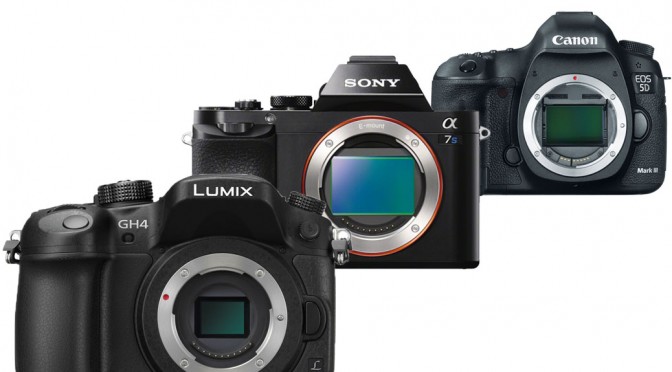 When Canon released the 5D Mark II in 2008 and then followed up with the 7D in 2009, indie film and video production was revolutionized. These cameras combined great optics with full HD recording. Just as importantly, their cost was within the reach of many indie filmmakers. The Canon DSLRs were all the rave.

In 2009, the talented Vincent LaForet opened people’s eyes to the potential of these DSLRs for filmmaking with his video “Reverie”. Shot with the Canon 5D Mark II, the video got more than two million views in the first week alone.

Perhaps even Canon did not realize what an outstanding camera they created. Their DSLRs were so successful that they hurt the sales of Canon’s pro video cameras.

Since then, a Canon DSLR camera had been an easy recommendation for any indie filmmaker. However, in the last couple of years the competition has been catching up. The second half of 2014 saw the release of two outstanding DSLM cameras: the Panasonic Lumix GH4 and the Sony α7S. These two cameras have brought in some features that no Canon DSLR currently offers. So, as we look around at camera choices at the beginning of 2015, is a Canon DSLR still the top choice for indie filmmakers?

Just a little background information. Tom Antos and I have been big fans of Canon DSLRs. Since 2009, the Canon 7D has been the workhorse of our production company. We love working with it – even when we had an expensive camera like the Red One on the set, sometimes we would still end up shooting more with the DSLR. The camera allowed us to move faster and focus more on shot design and performances. Even though we would lose in the recording quality, we feel that we ended up with better final product because we had more time for other aspects of filmmaking that are just as crucial.

But, with all our affinity for Canon DSLRs, it’s still difficult to ignore what the competition now offers. The three areas where Sony and Panasonic seem to have gotten a leg up on Canon are the 4K resolution, the codec and the slow motion recording.

Let’s compare the current top DSLR/DSLM models from each company, i.e. the Panasonic GH4, Sony α7S and Canon 5D Mark III. We will also have to mention Canon’s newest release – Canon 7D Mark II – as well as the upcoming Canon 5D Mark IV (rumoured to be announced on March 17, 2015 and shipping in April).

Of the three top models, only GH4 offers 4K video recording right in the camera. The Sony α7S also outputs 4K video but it has to record to an external recorder, such as the Atomos Shogun. In fact, the Shogun recorder can be used with both of these cameras and it turns them into powerful beasts – it allows to record 4K in RAW or the high-quality 10-bit Apple ProRes 4:2:2 (up to 30fps), or shoot slow motion (120/60/50 fps) in full 1080P HD.

On the other hand, none of Canon’s DSLRs allow you to record in 4K – they don’t support it natively and also don’t allow to record 4K externally. Certainly, Canon equips their cameras with chips capable of recording video in 4K. Therefore, it is not clear why they do not enable external 4K recording, the way Sony has done with the α7S.

Another area where Canon is fallen behind is the video codec. The GH4 uses bit rates of 100 Mbps at 4K and 200 Mbps at 1080P. Sony’s α7S uses the high-quality XAVC S Full HD (50 Mbps). And, of course, these cameras offer the option of improving the codec to 10-bit (or 8-bit in case of α7S) Apple ProRes 422 via the Shogun recorder, all at 4K resolution.

On the other hand, Canon’s native codec in the 5D Mark III is capable of recording at ALL-I 91 Mbps or IPB 31 Mbps. These numbers look solid, but footage recorded with this codec is not quite to the par set by the other two cameras (it looks softer, more blurry).

Also, with respect to slow-motion recording, Canon is now playing catch-up too. The new 7D Mark II is only the first Canon DSLR to offer 60 fps at 1080P resolution. The upcoming 5D Mark IV is sure to match that number, but there is no indication that it will offer any faster frame rates.

It is wonderful to be able to film slow motion above 60 fps. It is one of the great things that the Red cameras allow you to do. But these cameras are very expensive and that is why there has been so much excitement around the GH4 and α7S. Unfortunately, Canon has been slow to increase their specs in this area.

The final point of comparison are the small video functionalities which are often overlooked when considering a camera purchase, but are very important when actually using the camera on daily basis. The following functionalities are present on the GH4 and α7S but are missing on the current Canon DSLR models: exposure histogram, zebra pattern, focus peaking, audio level monitoring.

Having said all that, I am sure there are points on which the Canons win over the competition. Also, some of the gaps that have emerged can be eliminated by using the Magic Lantern hack (overriding Canon’s firmware). The problem with that is that Magic Lantern is unstable and so not recommended for big projects or work for clients. Also, the hack voids the Canon warranty.

Canon has actually been putting a lot of effort in improving the autofocus in their cameras, but that is of little benefit to filmmakers.

With Canon having so much going for them, it is surprising to see the company fall somewhat behind Sony and Panasonic. Their DSLRs are, I think, still the best for photographers. But when it comes to filmmakers, they definitely do not have the market to themselves.

Perhaps Canon is resting on their laurels. I’ve heard anecdotes from a few people who spoke with Canon representatives at the 2014 NAB Show. What they heard was not encouraging to Canon fans. The reps seemed totally unaware of how much their competitors had advanced and felt that they had the lead in DSLRs. They also suggested that those interested in great video technology should look to Canon’s (very expensive) Cinema line cameras instead.

Hopefully not everybody at Canon thinks that. Hopefully, they realize what made their DSLRs so successful in the recent years. Hopefully, Canon has not forgotten about filmmakers.