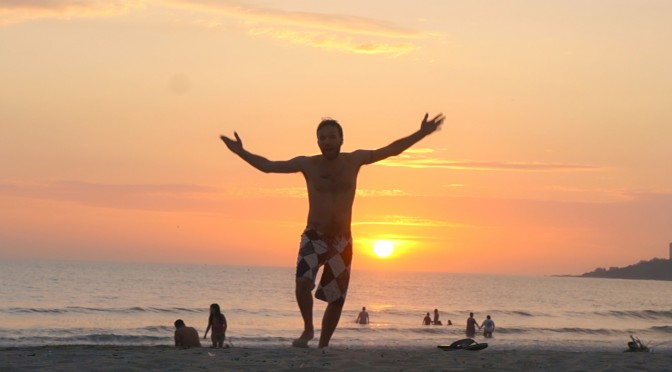 I have joined the Pharrell Williams’ “Happy” club!

As, I’m sure, most of you know, there is a giant collection of music videos from people from all over the world who just dance and show what it means to be happy – all done to the hit song “Happy”.

, one lens and one stabilizer

. I used what I think is still the best and most affordable entry level camera – the Sony NEX-5

Now, there are newer versions of the Sony NEX-5. I used the R version. If you’re in the market to buy one, don’t worry. They are all pretty much the same when it comes to the video functionality. The main difference is the lens that they come with.

I did a full test and video review of this camera last year which you can see here… but I thought I would further test out this wonderful camera in a barebones music video production. Literary, I just used this camera with the stock kit lens 18-55mm and I had it flying on my favorite stabilizer – the carbon fiber CAME stabilizer

. For my review of the stabilizer, see here.

I did not use any other equipment. No lights, no reflectors or other lenses or filters. I didn’t even have the time to set up the shots, since I shot this video as a spur-of-the-moment experiment.

I did this video while in Ecuador, busy with other stuff, but I did try to find three minutes (the length of the song) each day to do a quick shot of anyone willing to do some dancing for me. Just one take each – no planning or rehearsals or set dressing.

Sometimes, I used the camera in near pitch-dark settings, just to see how it would handle low light situations without any artificial lights. I’m not going to say it’s the best low light camera out there, but it is good.

As you can see in the video below, it has some grain but still produces good enough quality that I used those shots in the video.

If you are in the market to buy your first filmmaking camera, or maybe you just want a small and cheap back-up camera, then you can’t go wrong with the Sony NEX5. Same goes for the CAME carbon fiber stabilizers.

and Sony NEX-5TL on Amazon

Here’s the exact stabilizer I used for this video

The great thing about this camera and the kit lens is the autofocus function. Most camera’s have very slow autofocus and one that only focuses on the middle of the frame.

All the Sony NEX cameras feature a great autofocus system that will recognize a person’s face and lock onto it. This is a must-have when constantly moving around with the camera on a steadicam – as was the case in this video shoot.

The only other way to have good focus on a steadicam would be to put a wireless follow focus system and a video transmitter and have a focus puller do the job for you. Of course, a rig like that is not cheap and is a lot bigger and heavier, which in turns requires a bigger steadicam.

Another great thing about this small and simple camera set-up is that it doesn’t draw much attention – a great benefit when I was filming at night in some shady parts of Ecuador.

Here is the behind-the-scenes video of this mini-production.