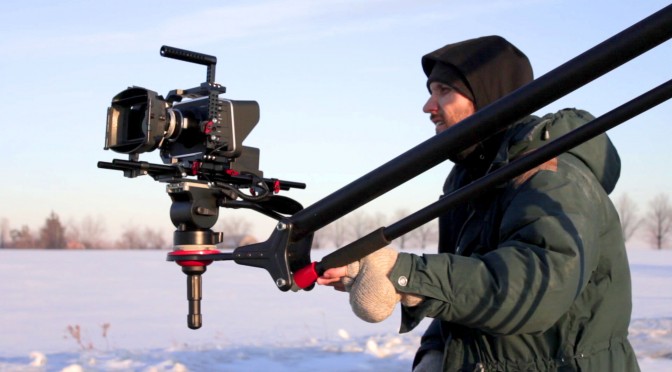 Camera cranes along with dollies were the first set of filmmaking tools allowing smooth camera movement. They are just as important today. Besides adding production value, they greatly enhance storytelling.

Whereas dollies allow side-to-side movement, cranes and jibs move the camera up and down. If you put a camera crane on a dolly, you will have even more freedom of camera movement.

By the way, a while ago I did a video tutorial for a DIY camera dolly – one that can support a lot of weight. You can check it out if you like to tinker and want to save money.

Today, though, I want to focus on camera cranes and jibs. I often get asked why to use a crane (or dolly, for that matter), if you already have a steadicam?

Steadicams are great. They allow to move freely in any direction and over large distances, but when it comes to getting smooth shots, they pose limitations. Even the best steadicam operator is unlikely to use a lens above 50mm focal length. Once you put in a zoom lens, every little camera shake becomes noticeable. So, you end up limited to wide-angle shots.

Steadicam by their nature can’t be perfectly locked off or dampened to make the tilt and pan completely still. So, to get a moving camera shot on a longer lens like the nice Canon EF 70-200mm f2.8, you will have to use either a dolly – for side-to-side movement – or a crane for an up-and-down motion.

Last but not least, if you have a crane of a good size, you can move the camera really high – certainly much higher than with a steadicam. This can get you some beautiful shots.

I’ve had a chance to test out two camera cranes from CAME, whose steadicams and camera gimbals I’ve tested out before. Their products have always impressed me and it was no different with these cranes.

The models I tested out are both similar in design, except that one is a lot smaller and lighter and can support cameras up to 5kg / 11lbs, while the other one is meant for large cameras – all the way up to 10kg / 22lbs.

Here are my thoughts on each of the cranes/jibs:

Another tip – if you get a crane, you should also invest in a camera monitor and a mounting arm so that you can operate it without having to always be right next to the camera. Especially when getting really high-angle shots where you can’t physically reach the camera, you’ll want to operate the crane next to the counter balance weights while watching a monitor.