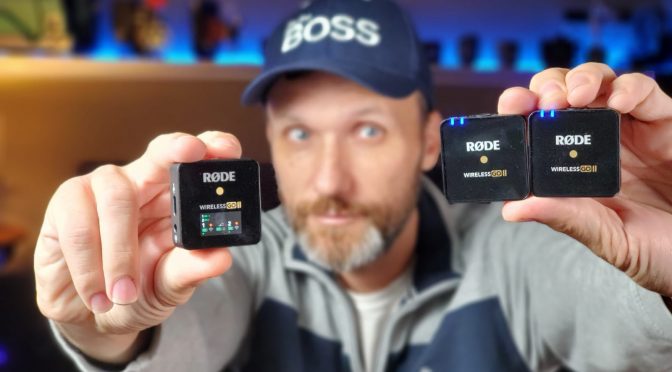 The original Rode Wireless GO was a piece of audio kit that changed the way we used to look at and use traditional wireless mics. Since the release of the first Wireless GO there have been many other companies that released competing systems. I reviewed most of them already on my website.

I was of course a big fan of the original Rode Wireless GO and excited to try out this new updated version. Specially once it seemed that Rode had listened carefully to and addressed the wishes that many users of the first version had shared online. Now after I have had the chance to use the Rode Wireless GO II I can happily confirm that Rode did address at least all my issues with the previous version. Not only that but they included extra features that I didn’t even think of before but that I now see how helpful they are. One such feature that I did not mention in my video review is the ability to record a backup version of the audio that is 20db lower so that any audio peaks can be fixed.

Whereas the original Wireless GO employed a single channel, version II is a dual-channel system, capable of handling two transmitters at the same time for simple, two-person shoots with low latency (3.5 to 4 ms).

Via the app, each transmitter provides an onboard audio recorder offering up to seven hours of uncompressed recording (24-bit / 48 kHz WAV) or 24 hours of compressed recording, perfect for worry-free backup recording or a fast and easy way to capture sound from your subjects. Export files in various formats such as MP3 or WAV (16-, 24-, or 32-bit float) with date and time stamp information as well as automatic markers anywhere the transmitter-receiver link was broken.

Since the Wireless GO II can handle two transmitters at once, it features the ability to switch between stereo or dual-mono output modes. This enables each transmitter, and therefore each subject, to be recorded to a separate channel. Alternatively, signal from both transmitters can be mixed together and recorded identically to left and right channels. Use the app to activate safety track recording (-20 dB on the right channel).

In addition to the traditional 3.5mm TRS analog output, the Wireless GO II receiver has a USB Type-C digital audio output for operation as a 24-bit / 48 kHz audio interface. This can be connected to a computer with the supplied USB Type-C to USB Type-A cable, to the Lightning port of an iOS mobile device via the Rode SC15 cable, or to the USB Type-C port of a laptop, iPad Pro, or Android mobile device with the Rode SC16 cable (SC15 and SC16 cables available separately).

The new Series IV technology extends the line-of-sight operating range of the Wireless GO II to approximately 656′ compared to the 230′ maximum range of the original Wireless GO. It also offers increased signal strength in crowded wireless environments. Plus, the system is designed to run both transmitters without affecting the range performance.