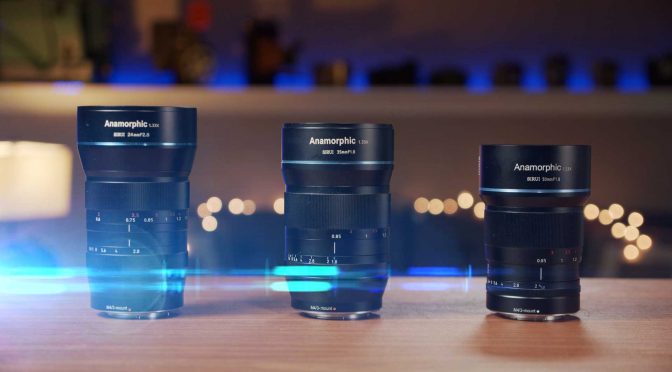 Thanks to new companies competing in the lens market we now finally have options for affordable anamorphic lenses.

One company that already released 3 such lenses is Sirui. I reviewed before all of their lenses but now I finally had a chance to use them on a small production to test them out side by side. Their lenses have a 1.33 times horizontal squeeze. Which if you use them on standard 16:9 camera and later desqueeze the footage 1.33X you will end up with a 2.4:1 cinema aspect ratio. Sirui offers now a 50mm f1.8 lens, also a 35mm f1.8 plus a 24mm f2.8 lens. Check out my experience of working with these lenses in the video below.

➡You can get the 50mm Anamorphic Lens here: https://bhpho.to/30mYs9S
Also find it on Amazon https://amzn.to/3hXqAX1
and Adorama https://adorama.rfvk.net/xWykR
plus eBay http://ebay.to/3ru9l58

Check out the finished film below.

Sirui’s lineup of these 3 anamorphic lenses means that finally we can shoot a whole project with real anamorphic optics on a low budget and using various mirrorless cameras. Like I mentioned in the reviews of each of these lenses, they are all small and light which means that when working on smaller productions where time and crew is limited, you’ll be able to move faster. Since the lenses and the cameras you can use are smaller, it means you don’t need big support gear such as tripods or gimbals. Also since these work on lots of different mirrorless cameras it means that they are now accessible to a lot more indie filmmakers who don’t own a cinema camera with a PL mount. Most mainstream anamorphic lenses are big, heavy and therefore require a sturdy mount like PL. Also most anamorphic lenses are very expensive and hard to find.

In case you missed my Ultimate Anamorphic Guide video then check it out below to learn about the history and different options in Anamorphic filmmaking.

These 3 Sirui lenses will allow you to go from a wide angle shot to a medium and medium close up. Of course as Sirui keeps on releasing more lenses, the coverage will allow us to go even tighter or maybe even wider but like I said before, I already find that these 3 lenses cover the most important focal lengths. If you follow the link in the description to the short film I shot with these 3 lenses you will see that all the lenses match up nicely in terms of the color rendition and anamorphic artifacts they create.

The way all these lenses also breath when rack focusing reminds me a lot of those vintage anamorphic lenses that were used in many classic films.

I love how all these lenses bloom and flare with that anamorphic horizontal flare that is noticeable but not digital looking. In fact all these lenses have a nice organic look even though they are pretty sharp when compared to many other anamorphics.

These are also fast lenses that can also produce shallow depth of field when used wide open. I never used them wide on this film because that isn’t the kind of a look I was going for. This is a short film comedy that has clean and brightly lit shots. But if you want to get shallow depth of field you definitely can.

We’ve shot this film on the Blackmagic Pocket 4K cameras. These of course have a micro four thirds image sensor which is a lot more cropped than many other mirrorless cameras. So if you opt to get these lenses in like the Sony E mount or one of the other available mounts then your shots will be even wider.

So which of these anamorphic lenses is the best and which one should you get? I guess if you can only afford to get one right now, then I would first start with the 50mm lens. But eventually I suggest that you get all of them if you want to have options for different angles and framing in your videos. Also keep an eye out on the next lens Sirui will be releasing. According to them it will most likely be a longer lens. So something above 50mm focal length. I myself will try to get it early for testing so I can show you guys how it looks and works.

Below are the reviews I did before of the 3 Sirui lenses, starting with the 50mm then the 35mm and finally the 24mm.

This post is sponsored by Storyblocks.com
They offer great collection of stock footage, graphics, music and sound effects. All of their content is royalty free for personal and professional use. Check them out at Storyblocks.com !