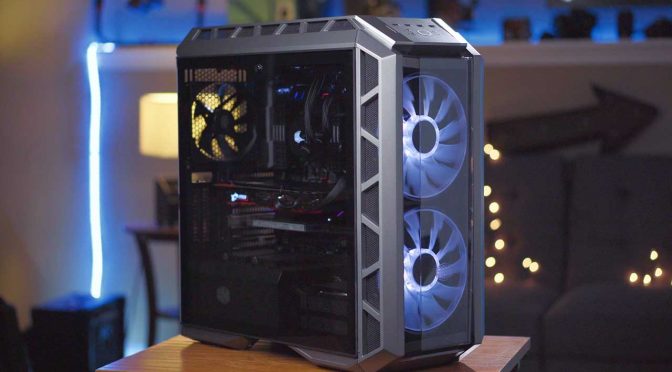 In this video I wanted to show you a custom-built video editing machine that so far has been able to handle anything I throw at it.

As I said in the video, in exchange for my review, MSI specialists put together a system based on my needs to allow me to do video editing, special effects, 3D work – and even a little gaming on the side.

Here are the specifications of this computer:

For more info and to download a PDF guide from for building your own custom PC, please go to the MSI website here.

Here are the parts that MSI used for my custom PC:

Now, with all that power and electricity running through the system, it’s very important to keep everything nice and cool. Regardless of how good your computer is, if it starts to get hot, then the whole thing will slows down. So, to cool it off, this PC has a water cooled system from Cooler Master. It’s the MASTERLIQUID 240.

Another thing from Cooler Master is the MasterCase H500P ATX Mid-Tower case with two huge 200mm fans in the front that are nicely lit up. Also, it has tempered glass side panel, so you can see all that computer goodness and video editing power working.

The system also has a 750 watt power supply from Cooler Master that’s nice and powerful.

Last but definitely not least – in fact, it might be the most important part of any PC – is the storage. If you have a very fast CPU and lots of memory, but your hard drives can’t keep up, then the computer won’t even use all of its speed. So, it’s very important to install the operating system and all the programs on a fast solid state drive. Here I got the Intel SSD 600P with 256GB of space. This is a M.2 SSD. I also got another SSD for storing some of my video files. This is a Intel 750 Series AIC 400GB PCI-Express Internal Solid State Drive.

Another drive that MSI included is the Seagate 4TB BarraCuda Pro, which is supposedly the fastest 3.5 inch hard drive on the market. If you wanted to, you could even add another M.2 SSD, since the motherboard has two slots, one of which has a M.2 shield that dissipates the heat.

So I’ve been using this computer for almost a month now, mainly for video editing, and it’s been great. Actually, one thing I was very surprised by is how quiet it is even when I,m playing the latest games with maximum settings possible.

But I’m sure that most of you are just wondering if it’s worth spending all this cash on custom build machine.

If you’ve been following my website, then you know that I’ve already built a few of my own computers. Last year I built a 4K RAW video editing machine for around $2000. I’ve also been using laptops when I travel, and actually two of my laptops have been from MSI. So, I definitely like their laptops, but to be honest, I didn’t even know they did PC’s until they contacted me.

So what’s the advantage of building your own PC, and also why go with MSI? First, when you build a custom PC you get to choose whichever components you want that fit your needs. Also, you get to make the most use of your limited [or unlimited] budget. After all, not all of us can afford the same things and not all us need the same things. Plus, since you build a custom PC you can also upgrade and maintain it as time goes on, since you want to stay up to date.

That’s one of the reason why I was never a fan of Mac. Not that they don’t make great computers. I even love a lot of the things about their operating system. But if you’ve owned a Mac, you know how hard and how expensive it is if you want to update it.

Basically, what I am saying is BUILD YOUR OWN PC. Now that’s where MSI comes in. Especially if you’ve never done a custom build. They can help you get it done. In fact, if you follow the link above, you will see not just the info on my custom build machine, but also you can download a PDF guide that will help you pick the right parts and build your PC.

Here’s some more info from the MSI computer experts about this custom build PC. It’s supposedly better suited for 4K video editing and beyond because the larg video files force the CPU to use more energy when processing, which generates lots of heat. The X299 SLI PLUS motherboard from MSI has digital power phases, which control the electrical signals more precisely, and that in turn makes the CPU run a lot more stable. Combined with the Cooler Master’s MasterLiquid 240 that uses both liquid and air cooling, the whole system runs at lower temperatures. Also because it’s one closed system (a fiber reinforced polymer construction), it means that the whole thing runs completely silent, and is able to use a higher level Intel CPU to process videos.

So, the total cost of this whole build is around $3K. Is it worth it? Well, to be honest comparing it to the PC I built last year for around $2K, when it comes to just straight 4K video editing, there is an improvement, but not as big as I was hoping to see. Even 4K RAW videos on both machines perform about the same (meaning they are very smooth).

Where the difference comes is when I connect the computer to two Ultra wide displays, for example. Or when I play back 4K or 6K footage with Lumetri color effects applied at full resolution. With my old system, I could do 6K video editing, but it was always in a smaller window and usually at a quarter resolution preview. This custom built from MSI runs smoothly even with 6K Red Epic footage and several effects applied to it.

So, as you can see, you definitely don’t have to spend $3000 on a computer. If you are just going to edit 4K footage for now, but might want to upgrade in the future, so you can edit 6K or maybe even 8K footage, then a custom build PC is the way to go.

I am actually going be using this computer on more project where I hope to push it even further, because honestly the editing work I’ve done up to this point on this machine hasn’t been much of a challenge. But I do have some 3D special effects work I’ll be doing soon so I’ll see if this thing can handle it. I will definitely do a follow up video to let you know how that goes.