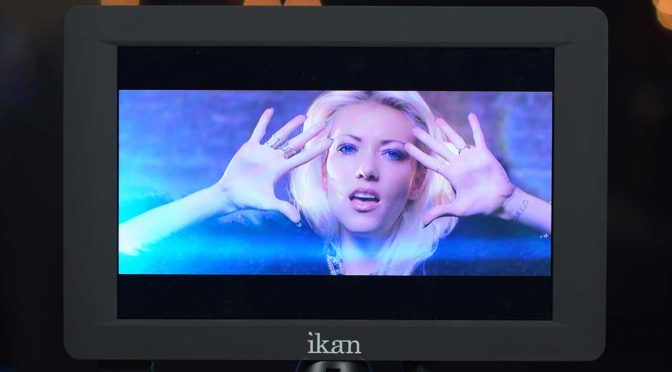 A weak point of many field monitors is that they are not very bright, making it difficult to use them outdoors. A monitor hood is one way to remedy this; another one is to spend over a thousand dollars, and get an ultra-bright model (1000 cd/m² or Nits).

Spending that kind of money is not something most indie filmmakers can justify. So, some manufacturers have responded and released models that are more affordable, but still bright enough to be used outdoors (in most situations). One such a monitor is the ikan Saga 7″ High-Brightness monitor, which I had a chance to use on a few film shoots. Here’s my review.

You can get the ikan Saga 7″ High-Brightness On-Camera Monitor on B&H, Adorama, eBay

In the video, I mentioned two other field monitors. SmallHD makes excellent monitors, but they are priced at a premium. The DJI CrystalSky, which has the suggested priced of $699, but is on sale as I write this, is also a very good option – it has a very good screen, but it lacks some of the pro functions of the ikan.

The monitor I have here is the Ikan Saga, model S7H. It’s a 7 inch monitor with 700 Nits of brightness. This makes it an ideal outdoor field or on-camera monitor. So, what’s the big deal about this monitor, since there are others out there that are brighter?

Well, it’s the least costly option if you want a monitor that’s bright enough to be used outdoors. At the time of writing, this monitor costs $700. Just to compare, the closest option is the DJI CrystalSky 7 Inch High Brightness Monitor, which has 1000 Nits of brightness, and also costs $700. However, the DJI doesn’t have some of the pro features of the ikan. For example, the DJI CrystalSky monitor offers only HDMI, whereas the ikan monitor has both 3G-SDI and HDMI input and output.

If you want a bright monitor with SDI connections, then the next best option is the SmallHD 702 monitor, which has 1000 Nits, but costs $1499.

It also has 1:1 pixel mapping and peaking, meaning you can make sure that your shots are perfectly in focus. There is also a 3.5mm headphone jack, so you can easily monitor your audio. Plus, the monitor has audio meters and other important tools such as Waveform, Histogram, False Color, Peaking, Pixel to Pixel, Zooming, Guides, and a few other things, all of which can be assigned to four buttons on top of the monitor.

On the back of the ikan, you will find dual Canon E6 battery plates, which can be changed out for any other popular battery type.

On the bottom, you will find the SDI and HDMI inputs and output, along with the headphone jack, mini XLR power connection, and also a USB connection, which can be used to both upgrade the firmware of the monitor, but also to power any USB accessories you might have. You also have ¼ 20 inch screw attachments on the bottom, top, and both sides of the monitor.

When you buy the monitor, you will also get a heavy-duty shoe mount, a neoprene monitor sleeve – which will protect your monitor when you throw it in your camera bag – and a P-TAP to mini-XLR power cable.

So what do I think of the monitor so far? I like that it’s thin and light. Also that it’s just bright enough to be used outdoors without the need of any shades. It’s got a good quality display and all those nice tools like the audio meters, histogram, waveform and – my favorite – the false color function.

What I don’t like about the monitor is that there is no vectorscope included – but I’m hoping it will be added later with a firmware upgrade. Also, I don’t like that the only way to power the monitor (besides batteries) is via the mini-XLR connection. I wish there was also a standard DC connection.

The last thing I don’t like is that the monitor can get pretty hot in the back, after you’ve been using it for a while. There is even a warning on the backplate of the monitor. I guess this is the heat sink, and it is the only way the monitor internals can dissipate the heat. On the positive side, the monitor is completely silent, because it doesn’t have a moving fan.

Overall, I think it’s a good monitor. It can become great if ikan prices it even more competitively, considering that there are similar options out there. Like I said before, as of right now it’s still the most affordable high brightness monitor with SDI and HDMI connections. However, it’s not the brightest. If the price drops, then it will definitely become a great option.