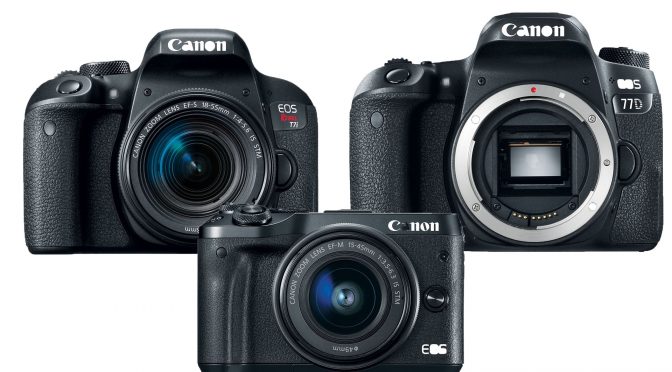 Canon has just announced three intriguing cameras for videographers, unless you’re looking for 4K video, that is.

Perhaps calling them intriguing is overstating it, because these cameras are in many ways similar to the Canon cameras already in the market. This means that you can expect the same Canon quality and a great selection of lenses. The only shortcoming is the lack of 4K, which stems from Canon’s business decision to offer 4K video with only their expensive cameras (the cinema line and the Canon 5D Mark IV).

All these three new cameras have the same sensor and processor, namely the 24.2MP APS-C CMOS sensor with Dual Pixel CMOS AF and the DIGIC 7 image processor. Also, they record Full HD up to 60 fps. Hence, they offer very similar video quality (the only real difference being the maximum 35 Mbps for M5 versus the 60 Mbps video bit rate for 77D and T7i).

As with all Canon DLSR and DSLMs, these new cameras use optical (i.e. in-lens) image stabilization. The M6, though, also includes electronic stabilization (what Canon calls Combination IS 5-axis). This type of stabilization isn’t quite as good as in-body (i.e. sensor-shifting) IS found in Sony cameras like the A7S II and upcoming a6500. Also, it means that if you use a lens without optical IS, you have no IS whatsoever.

The M6, being a mirrorless camera, is the smallest of the bunch. It is actually surprisingly small – the body is just a bit bigger than the compact point-and-shoot Canon G7X. Another similarity to the G7X is the fact that the LCD in M6 tilts up, making it a great tool for vloggers.

Another reason that vloggers are likely to love the M6 is that it has a 3.5mm microphone jack, allowing to record through an external microphone.

So, the M6 appears to have all the characteristics that a vlogger would need, namely: external mic, lightweight, flip-up touchscreen, image stabilization and very good autofocus (the Dual Pixel CMOS AF); in addition, you get a camera with a large image sensor (APS-C) and interchangeable lenses.

As of writing, the M6 appears to be the best option for vloggers.

Here is more detail on the new releases:

So, to sum up, the M6 seems like a great choice for vloggers. For me, though, the most appealing camera is the T7i, because it is a budget camera with great video quality. In fact, the popular 80D (and its predecessor 70D) is probably no longer a good buy for videographers. The only big difference is the headphone jack on the 80D, and I would not pay that much more for that jack.

Of course, things looks different from the perspective of photographers. But for videographers, they now have more budget and mid-price options among the Canon DSLR and DSLM cameras.