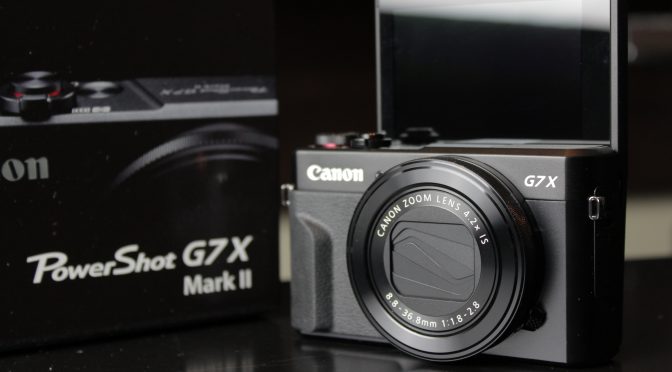 Recently I had a chance to use a new camera from Canon, the G7X Mark II, and here is my review of it.

It is a top-of the-line point-and-shoot camera that is perfect for when you can only take minimum gear, but still want to be able to take great photos and videos

The first generation of G7X has been a big hit with the vloggers. It is also perfect for taking family videos and photos, especially when travelling. For myself, I will also use it for behind-the-scenes videos of our indie film and video productions.

Here are key features of this camera:

Here is a quick comparison of Mark II vs Mark I:

The main competitor of the G7X is the Sony RX 100 Mark IV.

Here are the key point of how the Sony camera differs from the G7X:

My overall verdict on the Canon G7X Mark II?

The camera exceeded my expectations. It is a very good, fun-to-use camera. The image quality is very impressive. Its only shortcoming is the audio, which is typical of cameras that only use internal microphones.

It is a good idea to get extra batteries because the one Canon battery that comes with the camera will last you half a day – if you are lucky. Below are the batteries that I bought. They don’t last quite as long, but given the big price difference, you still get much better value with these third-party batteries.

By the way, when you put a non-Canon battery in the camera, you will get a message asking whether this is a Canon battery. Once you click “No”, you will get another message, this one saying that Canon cannot guarantee the performance of this battery. Despite this message, I have not had any problems whatsoever.

If you area going to have three or maybe even five batteries to charge (I got two of these double packs), a second charger is advisable. I really like the combo that includes the AC charger and the car charger, in addition to the two batteries, and that is what I bought.