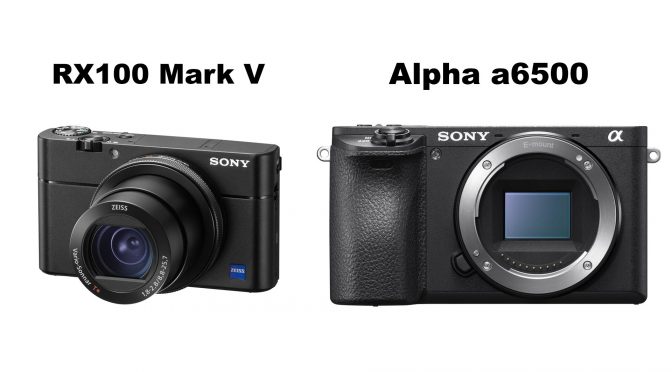 Sony just announced the release of two very exciting cameras, the Alpha a6500 and the RX100 Mark V. These are follow-ups to the very-well-received Alpha a6300 and RX100 Mark IV cameras, respectively.

Tom has reviewed the a6300 and liked it quite a bit. For all the details, please check his review.

Last year’s Sony a6300 is a mirrorless camera with an APS-C sized sensor, making it quite small. Yet, it offers internal 4K recording and other exciting capabilities like 120 fps in 1080P and S-Log2 and S-Log3 profiles (for increasing the camera’s dynamic range). Again, please check Tom’s review for all the highlights.

Now, Tom did note some negatives about this camera (five, to be exact). I am happy to see that at least two of them have been addressed (and for me, these were the two biggest issues). The Sony a6500 offers:

To verify whether there have been improvements or fixes for the other three issues that Tom identified, we will have to wait till we have a chance to use the camera.

The promotional material from Sony also indicates other improvements like longer buffer (around 20s) for continuous (photo) shooting, a touchscreen with touch-focusing (finally, Sony!) and autofocusing in just 0.05 seconds (the autofocus was already very good on the a6300). To get all the specs and improvements in the camera, please visit this page on BH Photo’s website.

Turning our attention to the Sony RX100 Mark V, this is a very capable point-and-shoot camera. It also records internally in 4K and at 120fps in full HD. There is even a high frame rate mode that promises frame rates of up to 960. Simiarily to the a6500, the RX 100 Mark V claims the autofocus speeds of 0.05 seconds. The S-Log2 profile is not to be missed either.

As mentioned earlier, the previous iteration of this camera, the Mark IV was well regarded. We have not done a full review of that camera, but we did compare it to another very popular point-and-shoot camera, the Canon G7X Mark II. You can read more about both cameras here.

These Sony and Canon point-and-shoot cameras are great for travelling and family photos and videos. You can get beautiful images with them, despite the smaller (one-inch) image sensor.

Also, the G7X and RX100 Mark IV have been very popular with vloggers (they both feature LCD screens that flip 180 degrees up, for example) and I imagine the RX100 Mark V will also be one of the top choices among professional vloggers.

The new Sony releases are presently available for pre-order at BH Photo Video. I imagine these cameras will be popular this holiday season, so pre-ordering might be a good move.