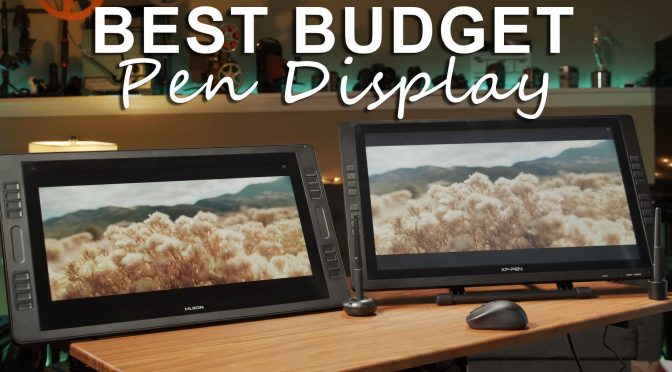 Today I am going to talk about picking the best deal for a drawing monitor with a pen or a drawing tablet display. Whatever you want to call it, it is essentially a monitor that you can draw directly on with a pen.

This is an essential tool if you are an artist like myself. Long ago I used a drawing tablet without a screen but it always bothered me that I would have to draw on one surface while looking at what I create on a separate display. There is nothing quite like looking and seeing exactly how you interact with the pen in real time. This is great for drawing, painting or doing storyboards like I often do for my film projects. It is also the best way to do photo retouching. A few years back I started using the Microsoft Surface. Even though the screen and pen quality on the Microsoft Surface is amazing, what I always felt it lacked was the processing power. It was enough to handle drawing or photo retouching in Adobe Photoshop but would freeze whenever I wanted to use it for intense editing or VFX work; like 3D sculpting or painting in ZBrush. I knew I needed a drawing pen tablet with a screen that I can connect to one of my powerful desktop computers that I use for demanding graphics work.

Many drawing displays have been available for years on the market but unfortunately they were always expensive. The better quality pen monitors will cost several thousand dollars. I knew I wasn’t going to spend that kind of money on a screen that I will only use when drawing with the pen. I heard from other artist friends of mine that recently there has been more and more budget drawing displays available that actually had decent colors and responsive pens. So I decided to get 3 popular but differently priced tablets.

The first and least expensive option is from Huion. Model GT-191 KAMVAS with a 19.5 Inch display that is full HD resolution.

The next option is the XP-PEN Artist22E. It is only a little bit more expensive than the previous model but it provides a 21.5 inch IPS display.

The last and most expensive drawing monitor I looked at was also from Huion and it’s the KAMVAS Pro 20. Honestly it’s the best one and the one I kept with me.

Actually when I was looking at the overall choices of low budget drawing monitors, most of them were made by Huion. This doesn’t mean that they are all similar. In fact the 3 I tested out side by side were very different.

First let’s talk about the quality of the pen that comes with each monitor. All 3 pens feel good in the hand and when drawing on the screen surface. They all come with a base so you can put your pen upright when not in use. The XP-PEN tablet actually has a pretty handy case for the pen that also holds the pen nibs together. The cover that unscrews from the case also doubles as the base for holding your pen. The XP-PEN also includes 2 pens in the package with 8192 pressure levels. The pen has a built in rechargeable battery. The cheapest tablet which is the Huion GT-191 also comes with 2 pens that are rechargeable and also have 8192 pressure levels of sensitivity. The most expensive tablet Huion KAMVAS Pro 20 only comes with 1 pen but this pen doesn’t require a battery or charging plus it also has a tilt function with over 60 degrees of tilt recognition. It also has the same amount of pressure levels of sensitivity as the other two units.

All the drawing monitors also come with a 2 finger glove that help reduce the friction between your hand and the tablet surface. Although I never found this to be a problem for me.

The monitors connect to your computer the same way. There are 2 cables. An HDMI cable to send the video signal and a USB cable to send the data of the pen input. Each tablet also comes with an AC power adapter that powers the units.

The real difference between the three units is in the quality of the display and the design of the overall screen. The Huion monitors can tilt from 20 to 80 degrees while the XP-PEN screen has the biggest range with 15 to 85 degrees of tilt. However I found that the XP-PEN is a little less stable because the screen itself is lifted off the table so the bottom leg of the stand is visible. The Huion models both rest with the bottom edge of the monitor which provides the most stable base.

The cheapest model of Huion however doesn’t have any dedicated shortcut buttons built into the unit. I found that those are essential when you just want to forget about the keyboard or mouse and only use the pen on the screen while working. In various applications those built in buttons allow you to set up shortcuts such as undo or changing brushes so that you can work quickly without the need to switch to a mouse or keyboard. The two more expensive monitors have 16 custom buttons but the HuionPro 20 also has two touch bars that allow you to do lots of things such as quickly zoom in or out or adjust the brush size. It’s a lot more intuitive to be able to just slide your finger along the touch bar to adjust settings then to click buttons for that.

In the end when deciding which monitor to keep for my studio, I knew pretty fast that although the Huion GT-191 is an amazing deal for the price, for me the screen quality just wasn’t enough. The colors and contrast ratio on this display are very bland and it doesn’t compare to the other two, more expensive monitors. If you are on a tight budget however and are doing mostly sketches or graphic work where rich colors are not necessary, then the Huion GT-191 is something you can look at, otherwise spend the money and get yourself one of the other two screens.

When it was all said and done, I had a hard time deciding which drawing monitor I should go with. The XP-PEN Artist22E Pro is a lot cheaper than the Huion KAMVAS Pro 20. It also has a great looking display, however I found that the touch screen bars, the extra dynamic range of the screen and the extra video inputs of the KAMVAS Pro 20 was enough to make me spend the extra cash. Also I found the pen tilt recognition on the Pro 20 is a must have feature for my work.

I was lucky however and found it while it was on sale on Amazon with a big discount off. In fact at the time of me doing this video there are even bigger discounts. Check my links for latest prices. So if you don’t mind spending extra money or if you can get it in time to snag a deal like I did then I would recommend that you go with the Huion KAMVAS Pro 20. It seems like a small difference between the XP-PEN Artist 22E but when doing professional work it might just be worth it. Now if you are a casual user then either of the two will work great. Even my son found these great tablets easy to work with as he created his artwork. Plus you can still order any of these and get them before Christmas, so what are you waiting for?