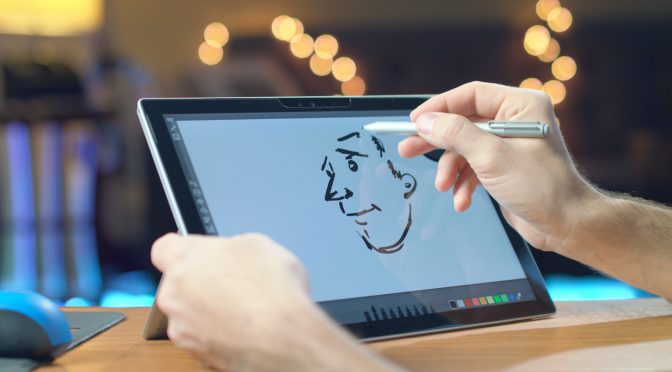 Today I wanted to show you 5 filmmaking gadgets I use all the time in my work.

These gadgets vary drastically in price so let me start with the most expensive. First is the Microsoft Surface Pro 4. I got mine a year ago. I’ve used it and abused it for the past year and it still works amazing. It’s a must have for me because it’s so small, thin, light and portable that I take with me on all the jobs. It’s almost like carrying a tablet or iPad, but yet so much better because it runs a full version of windows 10 pro. It’s great for checking footage on location, or copying and making backup of my footage. The version I bought is around $1300 and it’s the 256GB SSD, 8GB Ram, with Intel Core i7e processor for exact mode of this and all the other things I mention just check the description of this video.

Bag for Surface Pro on B&H

My surface pro is not the top of the line version but it’s still able to edit 4K video. Of course I dont have the full resolution on… but at a quarter setting it plays smoothly as you can see. I can edit 4K videos even when I apply some basic lumetri color grading effects in Adobe Premiere. I obviously don’t use this as my main editing machine but just something when I need to get a quick video out or dailies of footage I shot. I also use photoshop on it, and lightroom to edit my pictures. Which is way better than on any of my other computers because of the included pen. It makes painting over photos and retouching so much easier. I also use an app called Sketchable to do some quick drawing, specially when I have design ideas for a film or when I am doing storyboard. It makes it so much easier to have my drawings on a computer right away and this way I can email it to others that I’m working with on a particular film or print it out. Its also great when I’m traveling and an idea strikes me for a film. I can write a script. This thing is just a great laptop but in such a tiny format that I don’t mind taking it with me. I can fit the surface pro, it’s power adapter, a bluetooth mouse I got for it and even this USB dock and and an extra battery that will power this laptop for 4 extra hours all in a small bag.

Now the second item I always use is a light meter. Do you need a light meter if you’re starting out as a filmmaker? No you don’t. But is it helpful? Yes! And it’s a must once you start working on bigger productions and you have to communicate to your lighting team quickly. There’s different light meters. My first one is this sekonic studio deluxe which I’ve had for 20 years and it still works. It doesn’t require any batteries so that’s a big plus, but the bad thing about it is that it’s not a sensitive to small amounts of light. So when I was shooting on film cameras with max ISO 800 it was great. But now since we shoot with digital sensors that shoot high up there in ISO 25000 even, I would say you probably want something more modern. Here’s one I can recommend. The Sekonic Speedmaster L-858D-U Light Meter. It’s well built and very accurate. Has a lot of advanced features. Costs around $600. If you want something less expensive then get the Lumu Power. It’s $250. And it’s a Color & Light Meter Attachment for iOS Devices. It’s got all the advanced functionality of the Sekonic plus it even allows you to measure color temperature in your scene. Means you get perfect colors in all your shots. Can’t beat it. The only thing that maybe isn’t as good as the sekonic is that because it’s a phone attachment you gotta make sure you phone is charged so it can last you the whole day of filming. Also it’s not as strong build so you could accidentally break it where the lighting connector is, but if you remember to take the attachment off before you put the phone in your pocket then it’s not a problem.

Okay number 3 must have gadget is a smart phone. Doesn’t matter which one you get. And Im assuming you already have one. I also use these portable battery banks to make sure that my phone doesn’t die on me. I carry two of these actually because I use two phones. I got the Samsung Galaxy S8 and the Iphone 6. What I like about these battery banks is that they’re pretty big with 5000mAh and they have all the cables you need built right in. There is a version with a lighting port and micro USB cables and another with USB-C cable. My phones are nothing special but having both iOS and Android allows me to get all the apps that us filmmakers use. If you don’t know what they are then maybe I can do another video just about that. But for sure the most common apps I use are the Cadrage Director’s Viewfinder which allows me to quickly setup my shots, camera angles and figure out what lens to use before I ever break out my big and heavy camera rig. Also I often use the Sun Seeker app to see what the lighting situation is going to be like at any location. Where the sun is going to peek through a particular window, when it will set and all that stuff.

Gadget number 4 is a multi tool. I love using the ones from leather-man. There are two version. This more expensive one I got as a gift 20 years ago and it still works. It’s about $80 and there is also a cheaper version that is just as useful for $30. They’re great to help you tighten up loose parts on your camera rig. To help adjust things, remove filters, and just in general to help get stuff done when working with camera gear. A must have!

Last but not least gadget number 5 is a simple lens pan cleaning tool. It’s only $8 but you’d be surprised how often a production stops when there is a bit of dirt stuck on the lens. It’s why I always carry a lens pen in my pocket. You can dust anything off. Also if you blow some air on the lens and then clean it with the reverse side it will remove all the smudges and fingerprints.