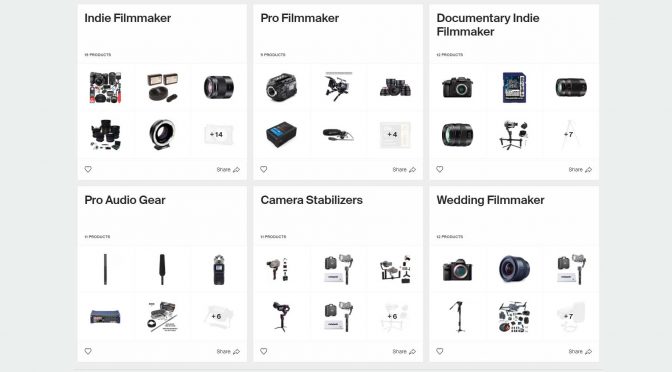 What camera or lens or gimbal should I get? This is probably the number one message I get. Here is my answer.

It all depends on what you are trying to film. That’s because there is no such thing as the best camera or lens, etc. Different tools have advantages in different uses but also disadvantages. For example, if you go for camera gear that is the best in image quality then that will almost always come with a bigger price tag. It also is usually the biggest and least portable piece of gear. But to best help you make a smart purchase I’ve divided my recommendations into simple to understand categories which you can find on kit.co

The first category is a kit for most people out there, which is what I call the indie filmmaker. This kit consists of a smaller mirorless camera that still has an aps-c sise image sensor. Why that sensor and not a full frame camera you ask? Well because most films were and still are filmed on cameras of a similar image sensor as this. This kit consists of the best camera value at this time which I think is the Sony a6500 along with some of the kit lenses plus the more affordable cinema lenses from Rokinon. Check out this kit to see everything else that I included in there. It doesn’t mean that you have to get all of this in order to be successful as a filmmaker. It’s just the gear that I own and use on smaller productions where I have to mainly do everything myself. Operating a smaller camera kit like this is a lot easier then a full size cinema camera.

Next category is the pro filmmaker kit. This is for bigger productions where you have time to setup each shot and you have a team working with you. On such productions a bigger size is not an issuse since you don’t have to do everything yourself. For this kit I build everything around the best valued cinema camera right now that shoots in true raw, which is the Blackmagic URSA Mini Pro camera.

Another category I added is for a documentary indie filmmaker. This is for those small productions where often the director is also the same person running around with the camera and audio gear. When working on such run and gun productions the last thing you want is heavy camera gear to will slow you down and make you miss that real moment. I think for this a small camera that can easily allow you to get focus and zoom in on the action from a distance is crucial. That is why I built this kit around the Panasonic GH5 camera. It has a smaller micro four thirds image sensor which makes zooming and focusing easier. It also shoot beautiful 4K video in 60fps plus 180fps in HD and in 10bits. You can not go wrong with this kit for any fast moving production, which can be a documentary but also corporate films, music videos etc.

If you go to my kit.co page you will also see that I added other categories for best audio gear that I use and different gimbals/steadicams I recommend. Browse through those and see what I wrote about each item and why I choose it. I also added a wedding filmmaker kit which was build based on a recommendation from a very talented and successful wedding filmmaker, Henry Martens. He appear on my filmmaking times show where he talked about his advice on getting cinematic wedding films done and how to make money doing it. You can see that video here.

I will be adding other categories such as lights, camera rigs, etc; plus I’ll be updating the list as time goes on. So make sure you check out my kit.co page if want my recommendations in the future. Thanks guys!

2 thoughts on “What camera should I get? Or gimbal? etc”