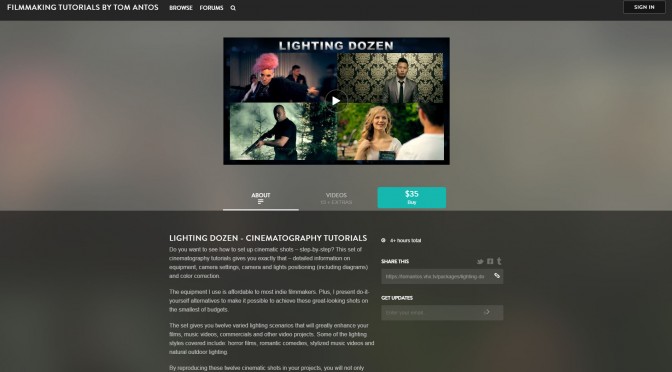 Today, I wanted to talk about the film and video distribution platform VHX.TV. It offers services that are essential to indie filmmakers, is simple to use and offers favourable financial terms.

There is more to what you can do with VHX – for example, offer a subscription-based video service – but you can read more about that on their website.

Internet is clearly becoming the main way to distribute indie films. There are very few theatre screens available for movies without big names and budgets (for both production and marketing). Also, although there are plenty of cable channels that can show your indie movie, they are all gradually moving their services to the internet (following the trend of audiences shifting from television to the internet).

As more and more people watch movies on devices connected to the internet, it is crucial that you have a website for your film. This is true just as much when self-distributing as when having your film handled by a traditional distributor. There are two main reasons for that.

Firstly, with so many possible venues, you need to provide information where your film can be seen (and you need to constantly updated it, of course). This way, whenever somebody gets the urge to see your film, you can tell them exactly when and where they can consume your content (whether it’s in theatres, on network television, cable, iTunes, Netflix…).

This seems like an obvious thing to do, but unfortunately it is still not consistently done, especially when films are handled by traditional distributors. To illustrate, I recently tried to watch the movie “The Puffy Chair”. I googled and found out that the film is available on break.com. Unfortunately, I could not see it there, because the website has the rights to show it only to US-based viewers and I am located in Canada. So, I kept googling and found a page dedicated to this film on the website of its Canadian distributor. Unfortunately, the only option offered was buying the DVD on Amazon.ca. That did not work for me – it cost over $30; I did not want to wait; and did not want more DVDs piling up on my shelves.

I found more options for watching the film in the U.S., like renting it on Amazon Prime Video

, but nothing else in Canada (I know, we in Canada should not expect much). I really wanted to see the film, but I finally gave up (I even considered signing up to a VPN service and fooling the American websites that I was in their country).

A few weeks later, I accidentally discovered that the film is available in Canada on Shomi and I was finally able to watch it. But this process was much more arduous than it should have been.

So, whoever distributes your film and wherever it is available, make sure you have readily available information that will point the potential viewers to your content.

As a side note, even if you are working with a large distributor and the film is available on multiple platforms, you will almost always still be left with significant geographic and temporal gaps where your content will not be available. Therefore, I strongly recommend that you always make the content available to buy and/or rent on your website (which, of course, is easily done with VHX). Larger distributors mights still give you resistance to you retaining such rights, but it is a fight worth fighting, unless you are getting a sweet advance from them.

The second reason for having a website is that you need it as the centre of your film’s marketing campaign. All of your marketing efforts need to have a point of destination. It is a place where you can continue your marketing message – and do so without incurring more costs; and, preferably, it is also a place where your target audience can take action – to buy or rent, in case of films. Well, a website for your film serves these purposes perfectly.

And yes, you will need to market the film yourself, even when working with established distributors and large platforms. The truth is that if your film doesn’t have big names and/or critical acclaim, your distributor will spend minimal money on marketing it.

Also, you should not stay passive just because your film is available on a large platform like Netflix, for example. Again, your no-name film is likely going to get lost in the shuffle. The breadth of choice is a friend to the viewers, but for you, it means that your marketing campaign needs to continue.

A good example of how to distribute an indie film is “As It Is In Heaven”. The maker of this film, Joshua Overbay, is working with a distributor and has the film available on a variety of platforms, including television. But the film’s website continues to play the central role in the distribution and marketing of the film.

An indie film that we wrote about earlier, “4 Nights in the Hamptons” by Michael Knowles also uses VHX to sell the film while working with a distributor who has gotten it onto numerous other platforms, including cable TV. Unfortunately, it does not have a website (beyond its VHX page), which, I think, is a mistake.