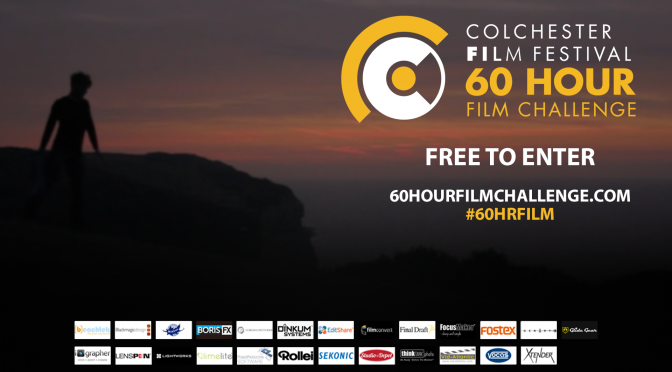 Colchester Film Festival is hosting its annual 60 hour Film Challenge from 2nd – 5th of October 2015. Over 200 films were completed at last year’s challenge.

Filmmakers from across the world are challenged to write shoot and edit a film between 2 and 5 minutes in length in just 60 hours. The challenge is free to enter and teams can register online (click here to register) until the 1st of October. The challenge begins on Friday 2nd October at 8pm (BST). Teams will receive an e-mail containing a title, line of dialogue and prop/action they must include in their films. Each team has to make their films over the weekend (3rd-6th October) and upload their final films to our Vimeo group no later than Monday 5th October 8am (BST). The shortlisted films will be screened and the winners announced at Colchester Film Festival on Saturday 24th October.

The 60hr Film Challenge is a non-profit competition that was setup to encourage filmmakers across the world from all backgrounds to create new and innovative films and break down the financial barriers into the film industry.

The challenge will be judged by editor Jason Ballantine (The Great Gatsby, Wolf Creek) and producer Richard Johns (Shadow of the Vampire, The Liability). More judges will be added to the panel in the run up the challenge.

Entering the challenge is a great way to get noticed, Rob McLellan’s 2012 entry ‘Love and All That’ went onto inspire MGM’s feature film ‘Abe’, which is currently in pre-production. Corona pictures (‘The Liability’, ‘Truth or Dare’) will mentor the winning team through their next feature/short film production.

Winning teams will receive over £10,000 worth of prizes from the following companies:

To find out more, please follow the links below