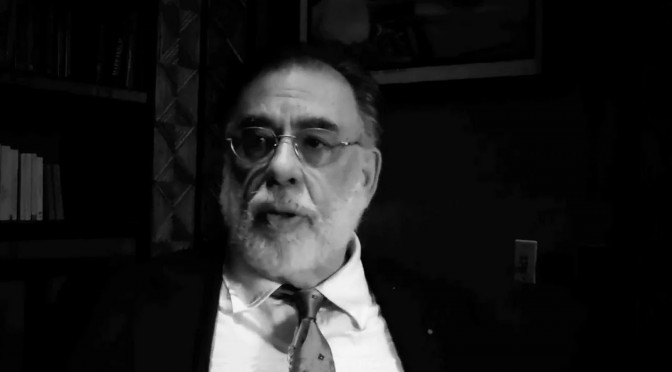 Here’s a short but interesting interview with Francis Ford Coppola that discusses the challenges of filmmaking. The surprising revelation is the fact that Coppola feels insecure about his writing, despite his many great accomplishments.

Any beginning screenwriter can certainly take comfort in this. But if a screenwriter always feels insecure about his/her work, how do you know you are on the right track with your screenplay?

It is very disheartening to spend months on a script and never get it to the the point where it’s good and where it can be realistically turned into a film. Indie filmmakers are under so much financial pressure, it’s difficult to pick yourself up after an unsuccessful project that sucked time and energy out of you. So how do you bring efficiency to this artistic endeavour?

One obvious method is to let others read your work and get their feedback. But you can only do that once you have something that is fairly complete. The problem is, when is it “fairly complete”, ready to be shown to others? Since screenwriters usually battle insecurity, they might just keep polishing and polishing the script instead.

In the interview, Coppola makes a quick remark that it actually invaluable. He doesn’t read his work until he’s got sixty, seventy pages and already has the ending.

Not looking back as you write accomplishes two important things:

By not tinkering, you will be keep your development time short and you are less likely to lose focus of the exciting, original idea that spurred you to write. So many times we get lost in the details and fail to convey the essence of our stories.

Also, being judgemental is a major impediment to creativity (hence why some artists resort to light drugs to put themselves in their creative phases). By holding off your judgement, you are more likely to actually finish your work.

By keeping your fresh perspective, you’ll be able to make a sound judgement on whether the script is solid and should be shown to others.

And what if the script is not ready to be shown around? Well, you should probably shelve it, then revisit it down the line – maybe even a few years later. You’ll have fresh ideas, regain your fresh perspective and might find a better way to tell the story. Or you might just decide that the original idea was not so great after all.

I would advise against reworking your script right away, if you are not happy with it. Making marginal changes won’t fix such a script and it will be difficult to separate yourself from what you just wrote and take a totally new approach. Sometimes you just need to let time go by.

To sum up, you should try to write fast and you will likely become a better writer.

For more ideas about screenwriting, check out this post where Tom Antos talks about writing, focusing on how to generate story ideas.

One thought on “Is insecurity intrinsic to screenwriting?”