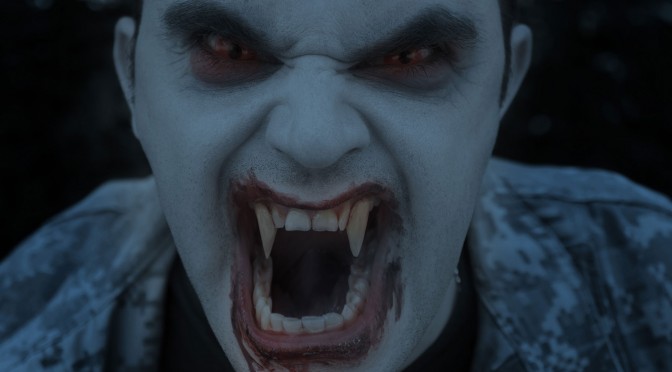 We’re their food… and we’re running out…

Today I am releasing a little concept trailer for a new feature film I will be working on. I’ve wanted to do this film for a very long time but something always came in the way. Not this time! After years of having the script and even getting some established companies in the film industry option it, we were not able to make it happen without sacrificing our vision. The amazing script for this film is written by a long time collaborator of mine, and a good friend Jeff Sinasac. He’s also going to be the lead actor in the film and you can see him at the end of this concept trailer we did.

This film really re-invents the vampire genre. The world as we know it has ended. A group of survivors struggle to survive in a post-apocalyptic world ravaged by savage and relentless vampires. Outnumbered by the thousands, the group searches desperately for their families in cities turned war zones. But in the face of predators that are fast, ruthlessly smart, and hungry, they’re forced to go into hiding in an underground bomb shelter. But when the shelter is compromised, things go horribly wrong. In 1968 Night of the Living Dead brought us the zombie apocalypse, introducing a whole new genre to the world. 28 Days Later revolutionized it by allowing those staggering enemies to sprint and leap. Red Spring will push it further still, with undead who can not only run, but are cunning enough to lay an ambush, smart and dextrous enough to use firearms, drive vehicles, and even roll on in tanks. Forget the glitter, glam and goth of vampires past – Red Spring’s foes will be filthy, single-minded and utterly ruthless.

I will be directing the film. We also decided to self finance the entire production. We’re lucky in that we can do this feature film for a LOT cheaper than any normal Hollywood production. Main reason is because of all the access to film equipment I have. Also me and Jeff know enough people in the industry that can help us make it happen. We’re even getting most of the locations for free because of the people we know in and around the Toronto area… people here are excited to help you instead of looking at you as their competition… that’s why I love filming in Canada!

Anyway I am excited to announce this project to you guys and I’m looking forward to have you join me along for the journey. I will be posting behind the scenes videos and info as much as I can. We are only in the pre-production stage of the film. We are still going to be shooting more tests etc before the actual filming begins in 2015. To keep up to date best to check our official film page: https://www.facebook.com/redspringfilm