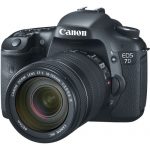 When it was released in 2009, the Canon 7D opened up new opportunities to indie filmmakers and the camera has been a huge success ever since. This has been our workhorse camera too.

We have done a lot of great work with it. Most of our music videos where shot on it.

Here are a few examples of short films that we shot on the Canon 7D.

Even our 2013 short “NWO United We Stand” was mostly shot on this camera (the aerial shots were done on the GoPro and the slow motion ones on the Red).

The 7D is getting a bit old now, being out five years, but it’s still a great camera. The good thing about it being an older model is that you can get a really good deal on it. For example, B&H Photo Video has a great offer right now.

Seem like really sweet deals, especially considering the price we paid for this camera back in the day.