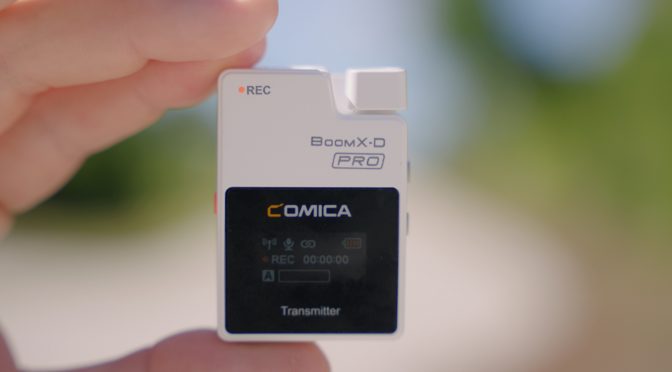 I haven’t done great reviews in a while but recently Comica sent me their latest wireless mic kit to test out. Here are my thoughts about the good and bad of the system.

MSI Creator Awards is a great chance to showcase your skills and win some nice prizes. I will be judging the film category. You can find out more info about it and enter your submission by May 30th HERE

Designed for mobile journalists, videographers, and vloggers, the black Comica BoomX-D PRO D2 is an ultracompact, true wireless digital microphone system with two microphones and just one receiver. It offers a complete solution for recording dialogue, interviews, and speech with two people talking simultaneously—directly to a mirrorless/DSLR camera, mobile device, or computer with backup audio recording available on each transmitter.

The ultralightweight BoomX-D PRO D2 consists of two ultracompact clip-on transmitters, each with its own built-in omnidirectional microphone, allowing you to quickly attach them to subjects for fast, run-and-gun-style shoots. For a more discreet look, you can plug the two included lavalier microphones with windshields into the transmitters’ 3.5mm input jacks. Each transmitter also sports 8GB of internal memory, allowing you to record up to 24 hours of uncompressed audio as a backup, in case interference or dropouts occur in the wireless transmission.

The system also comes with a tiny two-channel receiver that features both a USB connection for use with smartphones, tablets, and computers and a 3.5mm output connection for camera use. Camera mounting is made easy by the receiver’s clip, which easily attaches to your camera shoe. The BoomX-D PRO D2 delivers reliable transmission with a clear sound at a distance up to 328′. Built-in rechargeable batteries provide up to 4.5 hours of operation on the transmitters and 6 hours on the receiver.

The BoomX-D PRO D2 is well suited for content creators of any experience level. The components are paired at the factory, so you can start working immediately, while easy-to-read screens make any necessary adjustments quick and intuitive. A wide variety of helpful accessories are provided, including a 3-in-1 charging/data cable, a 3.5mm TRRS cable for use with smartphones, two 3.5mm TRS cables for use with cameras, and a carrying case.

Two Microphones into One Receiver