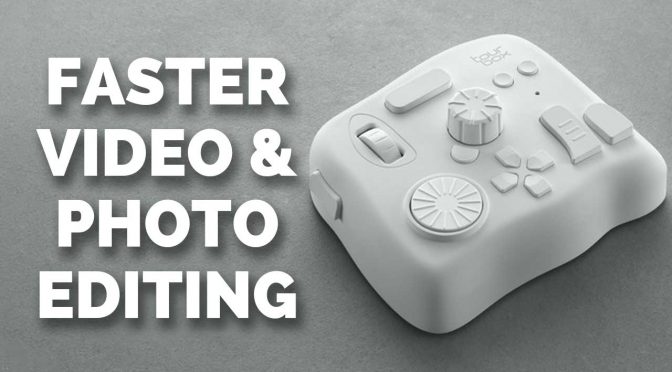 The TourBox that I originally reviewed back in June of 2020 quickly became my favorite control surface. It is now my must have tool for my video/photo editing and most computer work I do. When I first heard that there was a new updated version coming out I thought to myself “Why? The old one works great!”. However after trying out the new TourBox Elite I must say the new features make it even more awesome.

TourBox has an assortment of buttons, dials, and scroll wheels, that allow me to map certain shortcuts and functions in various programs I use.

With a 34% Super Early Bird discount on their Kickstarter campaign, at $178, it is a worthwhile companion accessory for anyone who wants a compact and wireless controller to speed up their editing workflow.

The look and layout are practically identical to the original TourBox controller. Despite my initial reaction to the seemingly random arrangement of buttons and wheels, I immediately realized how the original controller was very thoughtfully designed. It really didn’t need any changes.

Here is the review of the new TourBox Elite

The Elite is now Bluetooth 5.1 enabled with dual channels. This means you can connect to two different devices and quickly switch over by pressing on the Bluetooth button on the backside of the device. It’s a neat feature that could be useful for creators working on multiple systems.

What impressed me was how lag-free the actions were. It was definitely more responsive than the original controller and I noticed zero difference between when the USB-C cable was connected versus Bluetooth. You get to give up the cable without any consequences. A USB-C cable is still included if you need to plug in for any reason.

Once the TourBox Elite is connected, the haptic feedback kicks in as both audible and vibrating clicks. These settings can be adjusted individually for each mapped action. For now, it seems that you can change the speed of the vibration and its action, but not the sound.

Prior users upgrading will appreciate the better build and new users will find themselves with a very solidly built device that’s just heavy enough that it stays put while you use it.

This is one of the new features and I’m still trying to figure out how to get more out of it. Thus far, I’ve been content with being able to make shortcuts, but with their Macros capability, you can create a series of actions that uses both keystrokes and mouse movements.

One interesting feature is the ability to record mouse movements and clicks. It will save the exact coordinate on the screen where you might want to click on something. The only caveat is that whatever you’re clicking on has to be at that exact spot when you run the macro. There’s a lot of potential, but it also requires a precise workflow.

Like with the original, the gem behind this device is that every user can customize it to their own needs and preferences. While Adobe Lightroom, Photoshop, and Premiere are the programs the software is built around, it can work (very well) with almost any program out there. I use it predominantly with Davinci Resolve and Luminar 4, but I’ve also configured it for Excel, Word, VLC Player and Chrome to name a few.

Shortcuts to skip intro, ads, scroll back and forth in a video, go full screen, play and pause. It’s all accessible without having to touch my mouse, to give you an idea.

You can pre-order the new TourBox from the official Kickstarter page HERE.

You can also find the original TourBox on Amazon and B&H.