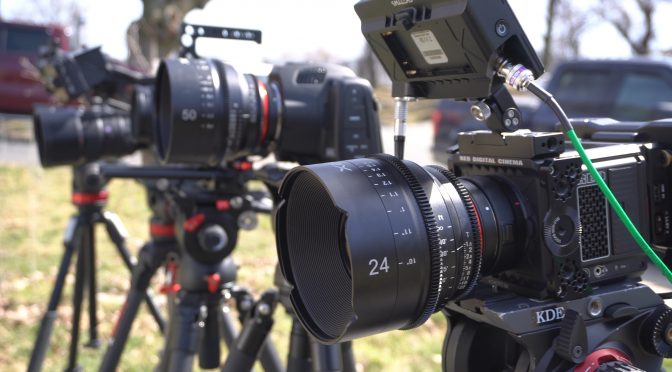 In my previous post I shared with you a camera shootout test I do every year using latest cameras. I asked you guys to vote and now the results are in!

Here is PART 2 of the camera shootout where I show the results of the vote plus a few more tests and info about these cameras. If you still haven’t seen PART 1 then you can see that video at the end of this post.

➡ Dual Cup Holder for filmmakers that is a must on every film set! https://bhpho.to/2NQSHha

So you guys watched the camera tests in part one and voted for your favorite. Nobody knew which camera was what since they were all just marked as camera A,B,C,D or E. So now let’s look at the results.
So now for the big reveal!

To be honest I was personally really surprised by both what the tests revealed and what cameras you guys picked as your favorite. I was thinking the Red Komodo was going to be at the top for sure and not the least favorite camera. But we all have to agree that the true winner of this test is this cup holder that no film set should be without! By the way the company that makes this isn’t sponsoring this video but if you want to help us out then go buy this cup holder using the link in the description. It’s cheap and actually works really well!

In case you were wondering, all cameras were tested with the same lens and settings or as close as we could since some camera’s native ISO differs and also they all have a slightly different sensor size. We used the same lighting setup with each camera. We used various Xeen cinema lenses for the tests. Each camera was filmed in their native ISO and if they had dual ISO we used the lowest in all the tests except the low light test. All cameras were shot in their native LOG formats. Red Komodo in Red Code Raw in IPP2 profile. Blackmagic Pocket Cinema Camera 6K Pro in BRAW Film Log. Sony FX3 and FX6 in SLog3 S-Gamut3.Cine Profile. ZCam E2 F6 in ZCAM Log.

All footage was graded by simply applying the camera manufacturer’s native LOG to Rec709 LUT. Now that’s where you have to be aware of the fact that these test shots were not really tweaked to try to match each other which means that each camera can look much better and be used in any big production. The Red Komodo I think was the least favorite camera simply because the native color profile that Red provides needs work in post. Komodo is one of the cameras that shoots in true RAW format and that allows the user the most creative freedom but it also requires work. You can’t just slap any Rec 709 conversion LUT on it and think your work is done. Also Red Code RAW doesn’t try to clean up the native camera noise like most of the other cameras do.

The Sony FX3 and the FX6 for example have a lot of in camera processing to clean up the sensor noise. This can be good if you need a fast turn around on a certain project but can also be bad if you want complete control over how the noise is processed. In terms of colors, in my experience of using different Sony cameras they are fairly easy to work but they do require some tweaking if you want really natural looking colors. If you simply throw the Sony Rec 709 LUT on the footage you will sometimes get weird skin tones. While this has really been improved with the Sony FX3 and FX6 it is still not as good as what I find with Canon cameras. I did notice in the comments you guys left that a lot of people said they liked both camera B and E which happen to be the two Sony cameras we tested. This shows that these tests are both very much based on personal taste and that also Sony has a similar look with these two cameras. The soft highlights and the way it processes the sensor noise definitely gives these cameras a very close look.

Now the Blackmagic cameras I find are the easiest and fastest to work with in post. They offer good but subtle noise suppression in camera. Really, the only thing you need to do is to use their BRAW native profile to get natural looking colors. The same thing I found with the ZCam line of cameras.

So just looking at the RAW images coming out of all these cameras I think they are all great in a properly lit set. In our outside test we controlled the light so that we never exceeded more than 10 stops of light difference between our actresses and the objects in the scene. In the low light tests where we closed the lens down one F stop to provide a good balance between lens speed and sharpness, I found that all the cameras looked great. None of them produced jarring noise or artifacts. Of course once we started to stop down on the lens and cut off the amount of light hitting the sensor that’s where you can see how well the Sony FX3 performed. In all honesty though you should never rely on the low light capability of your camera’s sensor. Always properly light your set and you will get the best image quality with any camera. I really like how well the ZCam F6 performed in low light even at higher ISO’s. It of course isn’t as good as the FX3 and it’s max ISO setting doesn’t even go anywhere as high as the Sony camera but it was still very good. Even though I own the ZCam F6 I was still surprised how well it performed alongside these other cameras. I guess if you were to ask me what camera I think is the best then I would say it’s the camera that you can afford to get or the one that you already have. I definitely under appreciated the ZCam F6 and if anything this test helped me fall back in love with this amazing little camera. Since I got it I haven’t had as many chances to use it since on bigger projects everyone wants to rent the Red or Arri cameras. While on small projects or youtube videos I just end up taking small cameras with great autofocus like the Sony FX3. So I often ended up leaving the ZCam to collect dust in my studio. Before we did this test I was already assuming that the Red Komodo was going to be my favorite and while I liked some of it’s features I am now even more happy to own the ZCam E2 F6. I will definitely take out this camera more. Recently I upgraded it with the built in variable ND filter and a few other accessories which make shooting with it a lot faster and easier.

This actually brings me to my next point. When you are choosing which camera you will buy or rent for a particular project, you have to look at not just the final images it creates; which as you can see with proper post production work all these cameras are great. You also have to look at how these cameras are going to function in your workflow. If you need reliable autofocus then from these cameras we tested you only really have two choices and those are the Sony FX3 and FX6. Their AF is amazing even when shooting in highspeed. Also if you shoot a lot of slow motion then definitely the Sony cameras will give the highest frame rates. At the same time when you look at these slow motion tests that each of the cameras give you at their max resolutions you might find that you like the way one camera handles those higher data rates. Some cameras can shoot higher frame rates but for example they sacrifice the image quality or force you to crop in on your image sensor. In that case I find that even though the ZCam doesn’t have the highest frame rates it gives you the most options without those sacrifices.

Another thing to consider is also how each camera’s sensor actually functions. If you are doing a lot of handheld, shaky camera work and need to counter that with good image stabilization then again the Sony cameras will be your choice. At the same time if you want more natural looking camera movements or if you are filming explosions or fast moving objects then you will want a camera that has the fastest rolling shutter. In that case the Red Komodo is the ultimate winner since it actually has a global shutter which doesn’t produce any rolling shutter problems. After that the Sony FX3 and FX6 perform equally as well. The ZCam is a little worse but still acceptable. The definite loser of the bunch when it comes to rolling shutter will have to be the Pocket 6K Pro.

A very important thing to consider is how well the camera handles when filming with it. This means how fast and easily you can change all the camera settings. In that I find the Blackmagic Pocket 6K Pro is the best with that easy to navigate menu and touch screen. The Red Komodo also has well laid out menus that you can change using the touch screen. Although it’s not very visible in bright settings and also not as responsive as the Blackmagic camera. The ZCam is not great right out of the box but the custom buttons can be configured so it’s fast to work with. The Sony FX3 and FX6 also allow a lot of customization. The FX6 has the most dedicated buttons which is best for someone working on a live set where the camera operator has to keep his shot always well framed and can only change the settings using physical buttons. The layout of the buttons is also great which makes remembering them easy.

Another amazing thing the Sony FX6 has is the built in electronic variable ND filter. This makes getting the perfect exposure so easy. The Pocket 6K Pro camera also has a built in mechanical filter which is great to have, even if it’s not as amazing at the FX6. The ZCam provides an accessory that adds an amazing electronic variable ND filter. Unfortunately the Sony FX3 and the Red Komodo don’t offer any built in ND filters and this can really slow you when working in fast changing lighting scenarios.

In the end, no camera is perfect but also all cameras can be amazing if you take the time to learn to use them. Always pick the right tool for the job and set up your camera with a proper rig so it performs best for your type of work.