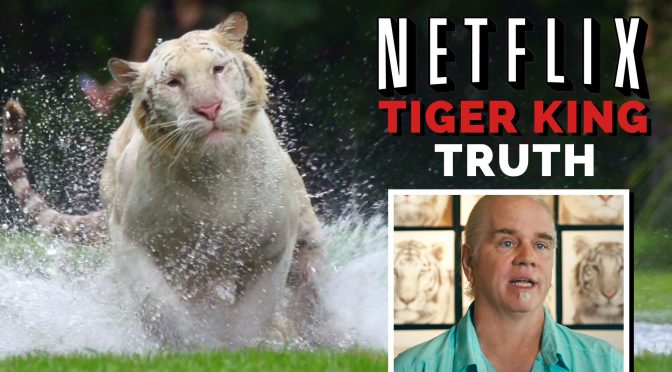 Netflix series “Tiger King” is really well edited. They even managed to make people say things they never actually did. Let me explain how this can easily be done by anyone through the magic of video editing.

When this new Netflix series premiered it seems it went viral and helped entertain all the people stuck at home during this virus outbreak. Strange times. I normally don’t watch much TV or online video so I didn’t right away know that this new viral sensation featured my friends from Myrtle Beach Safari.

After a few days however the word got around to me and I had to watch this show for myself. I gotta say it was a crazy ride that is well edited. However it uses a lot of creative editing techniques to make it look like people are saying things they never did. Not to mention that the show’s creators were very sneaky and clever in how they portrayed everyone who’s featured in order to make them look as outrageous as possible.

Also this show accused Antle of killing or euthanizing tiger cubs once they are too big to pet. They also said their facility was raided by the government. They never said that their facility is constantly supervised by federal authorities or that killing tigers is illegal and would have caused the government to shut down Myrtle Beach Safari a long time ago.  They’re still operational and aid the government official in tracking down illegally owned tigers by allowing them access to their DNA data.

The show had shots of tigers in tiny filthy cages. I’ve been there and there is no such thing that I’ve seen. Their facility is actually quite amazing, big and clean. The first thing that struck me about their place versus many of the public city zoos that I’ve seen is that Myrtle Beach Safari is huge and has open spaces where the tigers can run around. Not only that but I’ve never seen a full grown tiger run at full speed until I visited Myrtle Beach Safari. That is because all the other zoo’s just don’t have the space for tigers to run. Another thing the Netflix show forgot to mention is all the conservation work that Myrtle Beach Safari does around the world. In fact my friend Robert Johnson who works with Antle, goes every year to Africa where he organizes a safari for paying customers. After the safari is done he travels all over the continent delivering goods and helps train rangers and staff at various wild life preserves.

Myrtle Beach Safari allows people to come and see many beautiful animals up close so they can connect with them. The facility and their staff also helps spread the awareness of why many of these animals are near extinction in the wild and how people can help. Lastly the money that the paying visitors bring goes to all the animal conservation work done around the world by people from Myrtle Beach Safari.

I guess I shouldn’t be surprised at the lies from a from a little show titled “Tiger King: Murder, Mayhem and Madness”. That title alone screams SENSATIONALISM!

In the end, as time goes on this Netflix show will be forgotten as people move on to watch the next viral video but hopefully the animals that need the help will not be abandoned by the public.

Also if you want to see how a few editing tricks can make it look like people are saying things they never said then don’t forget to watch my video on how it’s done.

Special thanks to Curtis Judd for helping me out by acting as the narrator of my fake documentary. You can follow him on his YouTube channel.

I also used music from Epidemic Sound
Click my link above to get 30 days free of unlimited sound FX and music.

Also check out Myrtle Beach Safari if you want to make up your own opinion on Antle and the people who work there.