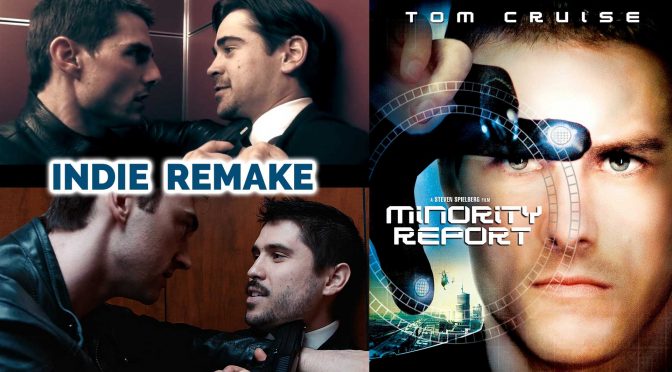 I have teamed up with Armando Ferreira and Rubidium Wu so we can recreate a scene from Steven Spielberg’s Minority Report.

The scene that we are recreating is where Tom Cruise’s character rushes into an elevator to escape but then is confronted by Colin Farrell. The best part about this scene is that it’s all done in one long take. No cutting. The scene starts in a tracking motion with Tom Cruise as he’s running then it stops on a medium side shot of Tom then when Colin enters the elevator it switches to a medium two shot. Once Tom pushes Colin against the elevator wall it switches to an over the shoulder type of shot looking at Colin. This one long take is something that Steven Spielberg does in a lot of his films. Personally I think if there is no need to cut then it’s better to do it all in one take. It makes the scene and the performances that much more natural.

To achieve this scene we shot on a sound stage in Los Angeles where there were several different sets built and one of them was a hospital that had an elevator. For the gear we used several lights from Intellytech along with 2 different Canon cameras and DJI gimbals.

Here are the Intellytech lights that we used:

Here are the cameras we used:

Here are the stabilizers we used:

Here is the wireless video & follow focus we used: