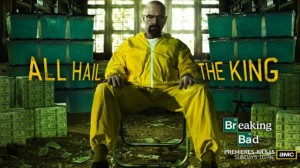 As you are probably aware, the AMC series “Breaking Bad” has come to an end. (SPOILER ALERT COMING UP) It was a great series finale, wasn’t it? Even though everyone knew that Walter White had to die, the episode didn’t feel depressing. I guess there was some relief in seeing all the storylines resolved in a fair way. Plus, it was good to see Walt finish with a big bang and on his own terms.

The series has become such a classic thanks to the talents and hard work of many individuals. One of the key ones is Micahel Slovis, the DP since season 2 and also the director of some of the episodes.

Forbes has published a very interesting interview with him. It is a long interview that covers a lot of aspects of the show, but a couple of points jumped out at me regarding the cinematography.

Slovis talks about the importance of planning when shooting outdoors. He was always very mindful of the position of the sun and would arrange the shooting time to get the sun exactly where he wanted it. All those great backlit shots, for example, did not happen by accident.

So that is something important to remember. Whether you work with no money or a lot of money, the only way to get great outdoor shots is to plan. To find out more about shooting outdoors, see Tom’s Tutorial 29 – “How to Shoot Video & Photos Outside – Light Reflector”.

Another interesting point that Slovis makes is that sometimes DP’s get too much credit. A large part of what people perceive as great cinematography is really great art direction and production design. Therefore, Slovis shines the spotlight on the outstanding work of Mark Freeborn, the production designer on “Breaking Bad”.

Tom talks about this at length in Tutorial 1 – “Make Video Look Like Film: Shot Design”. In this tutorial, Tom takes the emphasis away from the decisions on the camera, lenses, angles or lights that filmmakers should employ and stresses the importance of designing each shot.