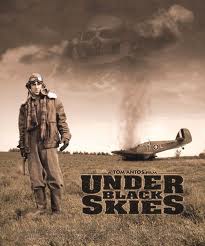 Set during W.W.II, the story follows a brash Canadian pilot, Vince Pavelon (Vince Salonia), who serves with the famed Royal Air Force. In addition to facing his enemies in the air, however, Vince is also haunted by dreams of his own death. While on a routine sortie, Vince’s squadron gets ambushed by German fighters. In the ensuing scramble Vince’s plane is severely damaged. He is forced to an emergency landing. What is worse, Vince finds himself in the the Nazi-occupied France.

Vince manages to land, but his plane is a wreck and his body feels like one. He immediately goes on the run, as the Germans are right on his heels. He is determined not to be taken prisoner and looks desperately for a soul that would shelter him. When a local turns down his plea for help, Vince sees with his own eyes the effects of living under the Nazi occupation. Vince marches on. As his blood and strength drain, he stumbles onto a lonely house. Out of time and options, Vince enters the house and puts his life in the hands of its inhabitants, whoever they might be.