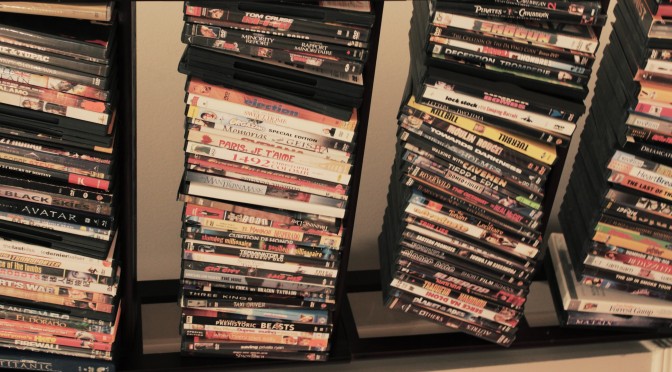 It’s safe to say that filmmakers are also cinephiles and, as such, they have, at least, a small collection of favourite movies. Since movies are our passion, though, for many of us buying movies is a hobby. Obviously, hobbies are all about fun, but this one has become a bit more complicated – even frustrating at times – because it’s no longer all about choosing the right films.

Anyone embarking on building up a movie library has a major decision to make – which platform to choose. Technology offers many ways to consume a movie and that means your movie collection can take different forms.

Blu-ray discs are probably the most obvious choice – they offer the highest video and audio quality (the highest bit rates – a maximum video bit rate of 40 Mbps) and, arguably, the most durable form. However, they also have some disadvantages.

The discs can be scratched, therefore it is debatable whether they are more durable than, for example, films stored on servers of a major platform, such as iTunes or Google Play.

It is also safe to say that, with time, Blu-ray players themselves will become less widely available, just like what has happened with VCR players. These days the only devices that you can buy that play VHS tapes are DVD/VCR combo players – and they are not carried by most stores, so you are better off looking for them online, for example Amazon

Another issue with Blu-ray players is that their firmware needs to be updated ever so often. Otherwise, they might not play newer Blu-ray discs (or the discs will miss some functionality). This is a problem I ran into. Unfortunately for me, the manufacturer of my player does not offer firmware updates. So, in order to play some of the Blu-rays in my collecton, I have to use a newer player.

A nice thing about having a video file of a film is that you should always be able to get your hands on a (free) video player that will handle your file type.

Similarly to DVDs, Blu-rays are also region restricted. That makes things more difficult if you were ever to move out of your region.

Lastly, Blu-rays don’t offer the immediate access of a digital product (i.e. streaming and/or downloading). True, with fast delivery from Amazon and other online stores, it is possible to get your hands on a movie in a day. On some occasions, though, that is still not fast enough.

Of course, you can also pick up a movie from a physical store, but after my recent experience, this is not my preferred option. I’ve been wanting to watch “Sicario”

for a while now and so I was very excited when it was released on Blu-ray on January 5, 2015 (it was available online a bit before that). I headed to a WalMart in the afternoon of the first day of the release, but it was already sold out. The next day, I headed to a couple of other stores, but again, struck out – even though the information online indicated that the film was in stock.

That was a good lesson to me. From now on, I will probably either order online and wait an extra day or two, or get it from an online platform.

This experience of “hunting” for a Blu-ray really got me thinking that building an online digital movie library might be a better option. The immediate access and portability of digital copies and streaming are big advantages. It also helps that the quality gap with Blu-rays has narrowed – technically, there is a still significant gap (for example 6 or 8 Mbps vs 40 Mbps), but in practical terms, there is little difference (of course, this is necessarily a subjective statement). For a further discussion about this, please read this Quora post and this analysis.

So, if the technical quality is not a concern to you, what else might be a concern? Firstly, you will always depend on some company to provide you with access to your library. You will not have direct access unless you download all your purchases – but that defeats, to a large extend, the benefit of using an online platform.

There is also a question of whether you really own the movies, or only have a license to watch the movies. Back in 2013, there was a case of a Amazon Instant Video customer who lost a film in his library because, it turned out, the service only offers licenses, and the terms and conditions of this license allowed for removal of content from customers’ cloud-stored library (if so requested by the content’s rights-holders). Obviously, nobody wants to have to read a legal document before buying a movie.

Also, you might be locking yourself into a device ecosystem if you opt for a digital online library. For example, Apple makes it difficult to access iTunes content on non-Apple hardware. That is less of a problem with the Google Play Store – you can install the Google Play Movies & TV app on iOS devices – but you are still “encouraged” to stay in the Android ecosystem.

Fortunately, there are online platforms that are ecosystem-indifferent – for example, Vimeo On Demand and VHX. On the downside, they have much less content available.

Going back to advantages of online platforms, normally the digital copies will cost you less than the Blu-ray versions. Also, if you live in a country where there is a value-added-tax levied, you might save yourself the tax if you purchase from an online provider that does not have a physical presence in your country. That is the case with Google Play in Canada (but iTunes does charges the Canadian VAT – the HST/GST). Unfortunately, for the European Union customers, this tax break has now disappeared.

Having discussed all the pros and cons of online digital and Blu-ray movies, there are two more reasons why I will still buy Blu-rays – although probably only occasionally. The first reason is the bonus features that are normally available with the physical copies. Being a filmmaker, I am interested in the process of making movies and so I am willing to pay extra (and go into extra trouble) to see the behind-the-scenes and similar content. But again, I will do it for only a few movies that I am especially interested in.

It is true that iTunes offers bonus features too, but they are normally not as extensive as what’s available on physical copies. Also, it is discouraging that iTunes doesn’t provide information what the bonus content includes – so you don’t know until you buy.

Google Play recently started to offer bonus features too (they call them Extras), but they are currently available on very few titles.

The Windows store does offer bonus features and it actually tells you what they are. Unfortunately, these extras are very underwhelming, as can be seen by the example of “Sicario”.

And the second reason why I will still opt for Blu-rays is when I want a 3D movie (a properly filmed 3D movie). I have already placed my order for “The Martian”

So, now I have this movie library thing figured out, I think.. at least until 4K video becomes the norm. Oh man, another headache. Films on 4K Blu-rays seem like the ultimate cinephile’s collection, no? Or should I get really fast internet and set up for 4K streaming?

Don’t you love the many choices that the fast-changing technology offers us?