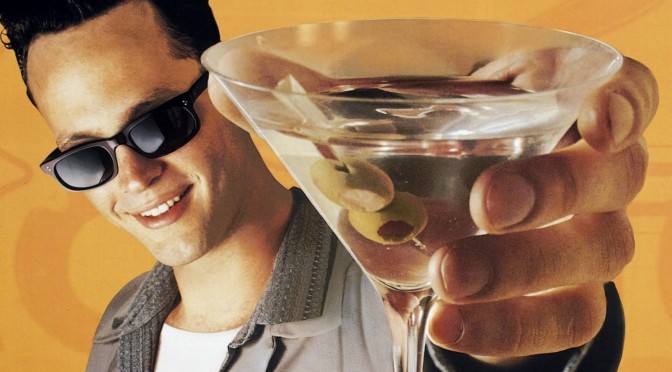 For those who don’t know, “Swingers” is a 1996 low-budget indie film directed by Doug Liman and starring Vince Vaughn and Jon Favreau (who also wrote the script). Actually, all three filmmakers were unknown at the time and it was this film that brought them fame.

They had $250,000 to make the film, which was a tight budget because they had to shoot under a SAG contract and also on film stock – digital technology was not yet up to par for theatrical distribution. These filmmakers had to be very resourceful and their experience on this film offers many lessons for today’s indie filmmakers – despite the technological changes since 1996.

The shoot was scheduled for eighteen days, with some days calling for twelve pages of script. For comparison, a studio movie does two pages per day; an indie movie four to five pages; a TV show maybe eight pages.

In “Swingers”, all the Las Vegas shots, for example, were shot in one night.

This schedule would be very ambitious in any case, but the filmmakers were also forced to film on short ends of stock film – due to the limited budget.

Liman: “We shot most of the movie with these 100-foot short ends. It’s a minute of film. Which also meant the actors could get through 60 seconds of a scene and I’d have to call reload.”

The problem is that reloading a normal 35mm film camera takes four minutes. This would make the process way too slow.

As a solution, Liman decided to shoot on a smaller 35mm camera designed for documentaries. The camera cost less to rent and it reloaded faster, but it was very loud – not designed to film with dialogue.

Liman: “To absorb the sound, I would take my down jacket and put it over the camera and then take the two arms and tie them together underneath the lens. And then my comforter would just get wrapped around the whole thing once. Jon would describe it like he was acting in front of a big, fluffy snowball.”

Tough budget-saving measure also had to be taken with the lighting. Rather than hire a DP, Liman lit the film himself – even though he had no experience in the area. Favreau got a bit worried when he caught Liman reading a book on basic lighting techniques just weeks prior to the shoot.

The lighting package was basic too – 100-, 150-watt hardware lights. Oftentimes, those lights were not enough, therefore Liman would take full advantage of any practical lights available on location. For example, in the scene where Mikey comes to his apartment late at night and checks the voice messages, Favreau opens the fridge just to use the light inside it to illuminate the scene.

So, the equipment was reduced to the minimum, but the film also needed a lot of locations, including bars and a casino. Securing locations is expensive, unless you are prepared to beg and call on every favour you can. And that’s what these filmmakers did.

For example, the casino locations – the Flamingo for the exteriors and the Glitter Gulch for the interiors – were free, but only after a lot of begging of the owners.

For the house party scene, the filmmakers asked their friends to throw an actual party. This way they got the location and the extras for next to nothing (they did have to spend money on booze). A few up-and-coming filmmakers ended up coming to this party and can be seen in the scene – for example, the writer and producer Mike White (“Nacho Libre”, “School of Rock”).

For the scenes in bars, after getting the necessary permission from the owners, the cast and crew would just enter the bar during normal business hours and start shooting. They had signs advising patrons that they would become unpaid extras if they entered a specific area, but that’s it. It would have been way too expensive to rent the places out, close them for the public and then bring in the extras to fill them up.

Filming like this for sure makes for a very unpredictable environment and you need to shoot small and fast. But the scenes can come out looking even more natural than on big-budget shoots and you save a lot of money to boot.

For one location, even begging wouldn’t do and the filmmakers had to resort to lying. When filming the scene where Mikey and Trent chat while parked alongside a highway, two different state troopers asked them for a filming permit. They did not have one and it was actually impossible to get such a permit on this particular highway. But they fooled the first officer by saying that they stopped just for a moment to let the rest of their travelling group catch up with them.

The second trooper was more difficult to deceive. They told him that one of their producers did have the permit, but he was already close to Los Angeles – but he could bring it back, if the officer was willing to wait.

The officer was willing to wait and so the shoot continued under the suspicious eye of the officer.

After about half an hour, the state trooper caught on to the lie and ordered them to leave. Unfortunately, the scene was not finished yet. So, while the crew packed super slowly, Liman surreptitiously kept filming with Favreau and Vaughn – he hid the microphone inside the car and operated the camera without looking into the viewfinder. The crew only finished packing once Liman got all the shots.

There were other critical situations where the filmmakers had to improvise. Another example is the final scene. When the team got to the set, they realized that the baby they cast was not much of a baby – the child was way too big to work for the scene. Running out of time, one of the producers flagged down a random car carrying a child and convinced the parents to put their baby in the film for $50.

Much of the production was chaotic like this and it must have seemed amateurish to onlookers. Mike White – recalling the filming of the house party scene – said “I remember them shooting and I actually thought, at the time, This is so embarrassing for them.”

And, at times, it was embarrassing, as Liman recalls:

“We were shooting in a trendy bar and suddenly I ran into some classmates from film school and I could just see the way they were looking at me — with this big poufy thing on my shoulder and some actors and a scene lit with lamps from a discount home store — that they were thinking Doug’s lost it. Just that, like, this poor guy, maybe he showed some promise in film school, but he has clearly gone off the reservation. This is not how you make a movie on any level. There is no aspect of this that looks professional.”

Fortunately for these filmmakers and all the fans of the movie, they did persevere and made their film their way. And that is the main point that should be taken from their experience.

Put your ego aside. Put your doubts aside. Don’t look for validation from others that you are a serious filmmaker.

You might have to humble yourself, embarrass yourself. But if you do, you will be one of the few who turn their dreams into reality.

To find out more about the making of “Swingers”, see this great article by Grantland.