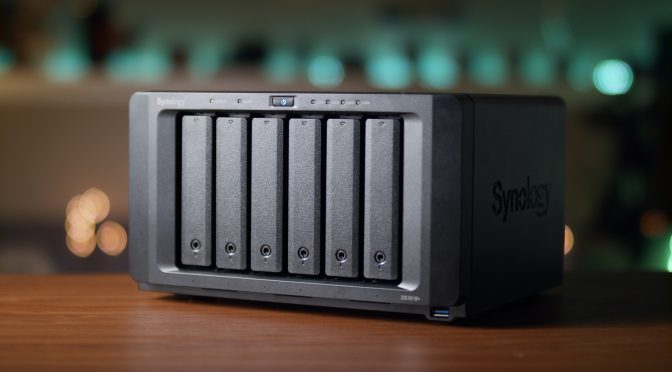 Hi guys, today I wanted to show you how you can take your video editing to a whole new level using a network attached storage also known as NAS.

The one I’ll be using is the Synology DS1618+. This is a 6-Bay NAS meaning it can hold 6 hard drives. Now a NAS is basically like a self contained computer that you connect directly to your network router so you can access it 24 hours a day from any of your network devices but even while you are away and using internet connection. I did review a couple of network drives before that I used as backup only, since they were not fast or powerful enough to be used for everyday video editing.

This new network drive is great for backing up your files because it’s easy to set up automatic backups using Synology’s DiskStation Manager, which is their web interface. It looks like a Windows or Apple desktop where you can install apps, check your settings, even browse, copy, upload or modify all the files you have on the NAS from anywhere in the world using the internet interface. What I did not expect was that this NAS is fast enough to also be used as my PLEX server. They even have an app for that which makes setting up PLEX super easy. More importantly, I can use this NAS as my main working drive in my home studio setup, so that 2 or more people can access the same project and work on it at the same time.

In Davinci Resolve this is very easy to do because you can set up a project database on the Synology NAS which allows multi user collaboration. If you never done this inside of Resolve but you like to have multiple people work on a project at the same time then this is a game changer. Basically in Resolve, by default you create a project in your local database that is saved on your computer. What some people don’t know is that you can also create a shared database and place it on a network attached computer or even better on a NAS like the one I am using. This way anyone on your network can open the same projects and work on them at the same time. Everything in the project is saved in real time as the different users work on the project. In the bottom right corner of the screen you create your user name and as you start editing a timeline, that timeline gets automatically locked so another editor can view your work but can’t change it while you are in the middle of editing. You can however have another user do the color grading while you edit and vice versa. I sometimes just duplicate a timeline and I’ll work on one section while another editor works on the duplicate timeline on another section. Then once we are done we can compare the two timelines in resolve where it will automatically show you the differences between the two. You can preview the changes and if you like it you accept it so resolve can automatically adjust your edit.

The best way to setup a database that will work with Davinci Resolve is to do it on a NAS drive. If you’ve never done this then there is already a great tutorial by Sondre Grønås that shows you step by step how to do this. If you want to learn about all the cool features of multi user collaboration in Davinci Resolve then check out this video below.

So let’s take a look at the speed of this Synology NAS drive. It’s advertised as gigabit ethernet speed per port. There are actually 4 ethernet ports on the back. The extra ethernet ports can be used to get faster speeds for reading and writing using link aggregation.

For my setup I’m just using the one port which gives a 1000 megabits per second (Mbit/s) or 125 megabytes per second (MBps) speeds. As you can see in my video review that is pretty much what I’ve been averaging. This means that not only can I use this drive for backup but also as my main working drive. In my video I also show how I playback from the NAS drive a 4K video file that is in RAW Cinema DNG format. It plays back at 24 frames per second without losing frames. I also play another file that is also RAW video from the Red Dragon camera in UHD 4K and as you can see in the video it also plays back great.

Now when I edit with an assistant on another computer. We can both access the same files on the Synology NAS and play them back in real time, unless these are 4K RAW files. In that case the network itself will not handle that kind of data rate. In my tests I noticed that when editing typical compressed 4K videos from mirrorless cameras then 2 or even 3 people can work over the network no problem. For anything more demanding I suggest you upgrade your whole network to faster speed using a 10 gigabit network. This Synology NAS can also be upgraded because it has a PCIe expansion port that will allow you to add a 10 gigabit ethernet card or a dual M.2 SATA SSD card for faster system caching.

In terms of storage this NAS can accept 6 drives inside. Up to 12 TB per drive this will allow you to have 72 TB of space. You can of course set up those multiple drives in various RAID configurations. This would allow you to have better backup redundancy by mirroring data across 2 or in RAID 6 you can mirror to 3 drives. This would obviously lower your overall storage amount but in return, even if 2 drives failed you can still replace those drives without losing any data.

If you need even more hard drive space then you can expand this NAS up to 192TB. You can do that by connecting a 5 drive expansion unit on each of the two eSATA ports on the back. That would give you 10 extra drives. Together with the 6 drives in the front of the unit that means you can connect up to 16 drives. In the back you will also find 2 USB ports, plus on the right is the access to the PCI-E Expansion Slot. There is another USB port on the front as well. Using the USB ports you can copy data directly from USB devices to your NAS without having to go through your network. Just install the USB Copy application in the DiskStation Manager and then connect your drive.

You can also get a second Synology NAS and store it at a different location like a friend’s house or studio and use Synology Cloud Station Sync to create your own personal cloud. Synology also has its own cloud service called C2.

The DiskStation Manager lets you set RAID, manage storage, check health of disks. Here you can install additional applications via the Package Center to tailor the NAS to your needs. QuickConnect for example allows you to connect to your NAS via the internet. Moments is a photo and video organization program. Image recognition identifies people, subjects and places making searching your photos easier. Surveillance Station makes it easy to setup a home security system where all your IP cameras can automatically stream and record to your NAS.

There are a lot more things you can do using this Synology NAS that I won’t even attempt to get into in this post. Like I said before a NAS is sort of like a computer that is designed to efficiently upload and download data across a network. It has to be able to always stay on and to do all it’s tasks without using too much power or making too much noise. The fans on the back of this NAS are powerful yet quiet. This system has a 2.1 GHz Intel Atom Quad-Core Processor and 4GB of DDR4 RAM which can be expanded to 32GB.

So if you are editing videos, especially if you are using Davinci Resolve and want a centralized place where you keep all your data and so that multiple people can edit the same project at the same time, then look into getting a network attached storage device like this Synology DiskStation DS1618+.

By the way I am now hosting different filmmaking workshop and 1 on 1 coaching with KITSplit. So if you want to learn cinematography, directing or advanced color grading then sign up for a workshop at https://kitsplit.com/workshops