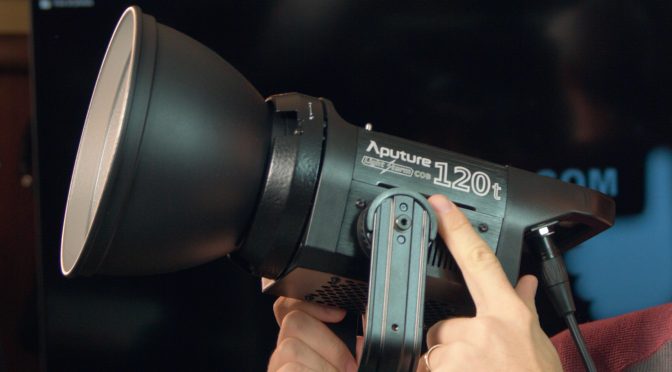 Lights like the Aputure C120t are very interesting because they are usually the key piece of a lighting kit – especially when combined with a softbox. What makes them the workhorses is their versatility – they are portable, give a good amount of light output, but don’t draw a lot of power (when using LEDs).

I like this light from Aputure because – like all the lights I have used from this company – it is solidly built. It provides all the pro features, controls and connections. Most importantly, it outputs powerful and color-accurate light.

The 120t stands for 120 Watt tungsten-balanced light. It has a Bowens mount, so it easily adapts any lighting modifiers and filters that use this popular mount.

There is also the C120d version of this light, which is daylight balanced.

In the lighting example that I show in the video, I also used a really solid and easy to setup softbox from Aputure called the Light Dome. This is a really big softbox that works amazingly well with the 120t light, but it will also work with any light that accepts the bowens mount accessories.

Here is where you can get this light and the softbox:

Note that you can get the light with Gold (Anton Bauer) or V mount. V-mount batteries are cheaper so, if you are not sure which mount to choose, I would suggest getting the V mount.

In addition, the light is also available as part of a kit (for extra $50 at BH Photo, for example). The light I reviewed came without the kit, but with the Aputure Light Dome. If you don’t have a softbox, I strongly recommend this one.

May 2017 update: Aputure also has a smaller version of this softbox, the Light Dome Mini. I’ve not used it yet, but got to check it out at the 2017 NAB

Both of these softboxes are specifically made for the Light Storm 120 and 300 series of LED lights.

One thought on “Aputure 120t Light and Light Dome Softbox”