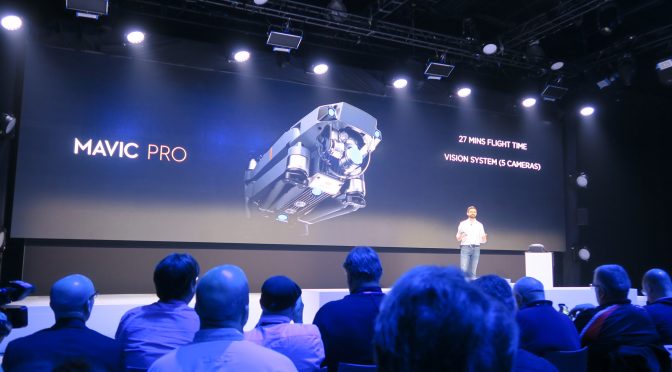 Last Tuesday I attended a fun event in New York City – a DJI product launch. As is usual at these things, there was a lot of press. The treat for me were the many cool talented filmmakers who also attended.

The launch was for the drone DJI Mavic Pro. Here are some notable points about the new drone.

As if that wasn’t enough, the drone also has a sports mode, which allows you to fly up to 40 mph (65 km/h), making it one of the fastest drones on the market. If you pair it with goggles that DJI offers, you will get a fantastic FPV flying experience – that you can also use for competitive drone racing.

Since the launch many people have wondered how the Mavic Pro compares to the DJI Phantom 4, which has probably been the best consumer camera drone. Well, although the latest drone is smaller, it appears that there are no trade-offs to its smaller size. The video quality is the same and there are, actually, some gains (besides its greater portability). They are:

The Mavic Pro does offer a narrower field of view than the DJI Phantom 4. That appears to be a downgrade, but I actually think it can work to its advantage. With the DJI Phantom 4, I sometimes found that once the drone got high in the air, the angle was so wide that everything was in the shot – I could not frame things out to get a better composition.

So, there is a lot of things to love about the DJI Mavic Pro. I think everyone who attended the launch event left very impressed and eager to get their hands on one of these drones.

The Mavic Pro will begin shipping in late October, but it is already available for pre-order at a few major retailers. Taking account the excitement and interest that the drone has generated so far, it is probably a good idea to pre-order if you would like to get one for yourself this year – especially since the holiday season is coming.

Here is where you can pre-order:

If you are outside of the U.S., it is good to look for DJI dealers on

At the same time, BH Photo does ship internationally – even has free shipping to Canada for orders over $99 – and offers duties and VAT payment at checkout, so you don’t get nailed later with unexpected fees.