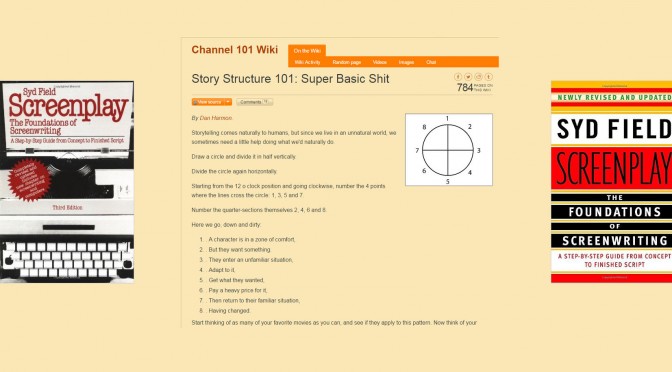 I think all screenwriters are familiar with the three-act structure, because it has been an integral part of storytelling ever since the ancient Greece. It is a tried-and-true method of organizing a story. Also, it is just as useful to beginning writers as to masters. Its effectiveness and popularity have a major drawback, however. It can lead to works that are predictable to readers and viewers – being exposed to three-act stories since childhood, we become adept at anticipating story points and twists.

Also, writers – especially beginners – often feel frustration as they try to fit a story into three acts. Sometimes, it doesn’t seem natural, or the work seems to lose originality when following this structure. Since the three acts have been around for so long, they have been well analysed – perhaps over-analysed – and broken down to the smallest steps or story points. As a result, there is a tendency to be rigid in the implementation of this structure. Perhaps, that is where a lot of frustration stems from. In any case, it is safe to say that we can benefit from alternative structures – especially ones that gives us more freedom to manoeuver our stories to unfamiliar places, while still keeping them cohesive.

I think that the Dan Harmon Story Circle fits this bill. It is not as well refined and has not been as dissected as the three acts, which gives the writer more freedom. At the same time, it gives just enough guidance to effectively serve as a structure.

You can get a detailed explanation of the story circle right from its creator, Dan Harmon, by going to his website. Here I will only present a shortened version of his explanation.

The story circle has eight points, which can be described as follows (source: Dan Harmon):

To make these steps clearer to me, I have a slightly altered version:
You–> Need–> Go–> Struggle (or Adapt) –> Find–> Suffer–> Return–> Change

Again, to get a really good handle of what each step means, please refer to the creator’s website.

Since this structure is a circle, your story will come back to the same place, except that the hero will be changed. This is very effective because you will not find a more persuasive way to show a change in a character than presenting him or her in the same situation again, but altering his or her reaction. Of course, the three-act structure does not stop you from doing the same, but it does make it easier to miss completing the circle. On the other hand, in Dan Harmon’s method, this step is explicit and central to the concept.

It is also interesting how Harmon compares film and television writing. Basically, in episodic content, only the last step is different. You do not let the character change, learn from his or her mistakes – or, at least, not enough to complete the story. Harmon has a longer explanation of this here.

A part of the process of creating the eight story points is dividing the story circle in half twice (i.e. creating quarters). Now, each of the semi-circles that you outline has an important meaning and crossing from one half to the other is a source of drama in the story. The first time you cut the circle in half, you delineate the moment that the hero enters a new situation and is forced to adapt (and struggles to do so). This usually means that the protagonist fights some external force. Now, the second time you divide the circle in half, you define the inner struggle of the hero. Once this hero crosses your dividing line, he or she finally faces and tries to overcome his or her inner flaws (You can read Harmon’s explanation of this concept here).

Again, the three-act structure allows for this too, but the story circle presents the internal and external tensions in a visual way. This, in turn, means that the writer is much more likely to stay focused on the sources of tension and implement them effectively.

So, to conclude, I think the Dan Harmon story circle is more effective than the three-act structure because: a) it gives more flexibility to the writer in how to implement it (when compared to the finely distilled versions of the three-act structure, as presented by Syd Field, for example) and b) it is a visual tool, making it easier for the writer to keep the story organized in his or her mind.

Of course, another alternative is not following any structure at all. Some people prefer to lock themselves up and write intensively without looking back and judging their work, until they finish the first draft – or the “vomit draft” (for more on this, see this interview with Jay Duplass). Since most well-crafted screenplays go through numerous drafts anyway, this seems like a sensible approach. There is also scientific evidence that the best way to be creative and also avoid writer’s block is to write without stopping to judge one’s work. For more on this, please see my earlier post “Screenwriting tips – based on brain science”.